Once again, Dean Johns, noted columnist at Malaysiakini has written a well-analysed piece on Raja Bodek’s party in Has Gerakan lost the plot?

Johns cited 'brave' speeches by the Raja himself and several Gerakan Party leaders during its annual general meeting last week, which took many Malaysians aback, knowing the obsequious, servile and sycophantic nature of a few of its leaders.

The Gerakan of today isn’t even a pale shadow of its original self, and is only tenuously associated by the same name.

Johns correctly identified what those leaders so-called ‘brave words’ were, nothing more than a well scripted sandiwara (theatrical play). He wrote:

Is Gerakan ..... really a Beauty desperately struggling to escape the embrace of the dreadful BN Beast? A Snow White yearning for release from the clutches of a gang of predatory political dwarfs?

My guess, as cynical as it may seem, is that the truth’s not nearly so airy-fairy as this. In fact I suspect that, far from having lost the plot, Gerakan is simply playing its part in a classic political charade.

It delivered lines carefully scripted to make it look acceptable or even attractive to all those who detest other higher-profile parties in the coalition. And giving BN heavies Hishammuddin and Badawi some badly-needed cues to act as cuddly as Noddy and Big Ears.

Even then, Johns has been relatively gentle with Gerakan’s implausible behaviour. I suspected, as I had posted in The necessary demonization of Lee Lam Thye (2) - don’t worry, this post isn't a continuation of the LLT series ;-) – that:

Malaysiakini tells us that none other than - to borrow a sweetie’s WMD (Weapon of Marvellous Dismissal), gasp, gawd, omigosh - Raja Bodek called on the government to ‘seriously consider’ the setting up of a royal commission to investigate the volcanic matter erupted by the Lingam videotape.

With that, Gerakan claims pole position among BN component parties to come out strongly on the videoclip than just having a mere independent investigation panel, which has limited powers under its very narrow terms of reference.

Hmmm, very unusual yet ... yet, yes yet not so strange if we consider Raja’s action against the backdrop of the approaching general elections. Has this been a Gerakan pre-emptive strike against its BN rival, the MCA, rather than a genuine call for a more comprehensive and empowered investigation?

Yes, I agree with Johns that Gerakan had probably played to a script (and undoubtedly cleared by Taikoh) to show the Chinese community that it has a backbone while at the same time, by stealing a march on its BN rival with so-called 'brave words', the MCA doesn’t.

As I had blogged in Penang Chinese are racists? I highlighted the preference of UMNO for a more servile and malleable Gerakan to the MCA:

PM AAB re-stated what his predecessors since Tun Razak’s days had stated, that the CM post belonged to Gerakan (encore commiserations: MCA, go ahead and weep!).

As I had blogged previously, why disturb a (another) winning formula where Gerakan and the MCA have been allocated seats that nicely split the Penang Chinese representation, making UMNO by default the BN component with the most seats and therefore the principal political influence over matters in the state.

See also my previous postings:
An island cursed & it's not Langkawi!
The Brilliance of Hishamuddin Tun Hussein

Making an UMNO person the CM could possibly see all Chinese in Penang flocked to the DAP banner, or worse, the MCA – yes, not an error, I haven’t got it wrong – a MCA as the BN component with enough seats not to require UMNO’s support in the State Assembly would be disastrous (for UMNO), and insufferable.

To UMNO, there’s nothing more insufferable than a cocky and difficult-to-restrain MCA. The formula is to give parties like the MCA and Gerakan enough to keep them docile, dependent and dependable, but not enough to make them too assertive, aggressive or amok-ish-ly independent. 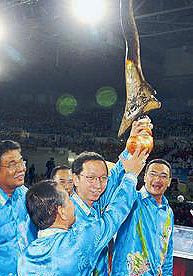