Hishamuddin Tun Hussein urged to use his keris

So Hishamuddin Tun Hussein, UMNO Youth chief, famous for his keris waving has unsheathed his keris at the UMNO general assembly once again, waved his keris and kissed his keris.

But UMNO Perlis delegate Hashim Suboh decided that he shouldn't stop there - he ask Hishamuddin when he (Hishamuddin) will be using his keris? 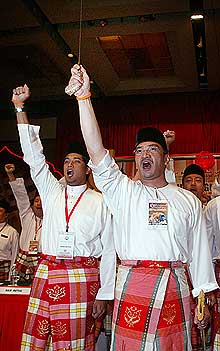 The New Straits Times reported Hashim Suboh asking Hishamuddin the question yesterday at the end of the debate on economy and education. Apparently Hashim deliberately asked that as an indirect criticism of Hishamuddin’s perceived weakness in dealing with demands from the Chinese schools.

Hashim said “force must be used against those who refused to abide by the social contract.”

Hmmm, very forceful character, wasn't he? Obviously he must have felt that's what a keris is for, to enforce contracts - WTF do we need courts of justice, judges, police or law officers?

Could it be that forces within UMNO are now forcefully plotting against Hishamuddin, to topple him, so that someone else may take his place, as a more forceful personality?

But Karpal Singh of the DAP was mad that the deputy chairperson of the assembly, Amiruldin Badruddin, allowed such a seditious question which proposes unlawful violence against Malaysians in the forum without even asking for its immediate retraction.

Has Karpal forgotten that Amiruldin Badruddin himself made his UMNO mark as an even bigger racist?

In 2004 Amiruldin spoke out strongly in favour of ketuanan Melayu (Malay supremacy). He stated: "Let no one from the other races ever question the rights of Malays on this land. Don't question the religion, because this is my right on this land.".

He warned those who opposed the NEP policies would be stirring up a hornet's nest, while he waved a book on the May 13 Incident, implying the Malays would go on a rampage again.

Gerakan president Dr Lim Keng Yaik has also been pissed off by the language and racist remarks by some of the UMNO delegates. He seemed to concur with Karpal Singh that some of these comments could be considered seditious, though he didn't not give specific examples.

He retorted to querying reporters: "You all have reported on it (the assembly), you know the ones I mean!"

Gerakan Youth chief Mah Siew Keong reckons the non-Malay communities have also been pissed off by the viciousness of the racist remarks made by UMNO delegates, particularly this year. Mah said their feelings will undoubtedly be reflected in the coming general election.

He lamented: “All this will affect the votes in the next polls. Other communities are not happy.”

Don't hold your breath waiting for AAB to reprimand them, nor the IGP for investigating seditious threats of violence. Hey, it's UMNO general assembly where racist comments and threats of May 13 violence are norms.