‘She just had a cough’: Teen’s COVID-19 death shakes France

PARIS, March 27 — A week ago, 16-year-old Julie came down with a slight cough. On Wednesday, she became France’s youngest COVID-19 fatality, shaking a nation hit by a spiralling health crisis.

For many people, the high school student’s death brought home what experts have warned — the new virus is not a threat only to the elderly or people with underlying medical problems.

“She just had a cough” that anyone might get as winter winds down, Julie’s mother said. Initially, they treated it with cough syrup and steam inhalation treatments.

By last Saturday, however, Julie began feeling tightness in her lungs. “Nothing major, she just had a hard time catching her breath,” Sabine recalled.

Soon after, Julie was having coughing fits, so her mother took her to a doctor.

Diagnosing a respiratory impairment, the doctor called an ambulance, though it was fire-fighters, who often respond to emergency calls in France, who arrived.

Covered head to toe in protective coveralls, masks and gloves, “It was like ‘The Twilight Zone’,” Sabine said, referring to an American science-fiction show from the 1960s.

The responders gave Julie a face mask to wear under an oxygen mask, and brought her to the nearest hospital, at Longjumeau in the Essonne department south of Paris.

She had a scan of her lungs, and was tested for COVID-19. While awaiting the results, Sabine went back home, and later called the hospital for news.

They told her the scan had shown some congestion in the lungs, she said, but “nothing serious.”

‘Has to be a mistake’

Later that night Julie was again fighting for breath, and an ambulance transferred her to the renowned Necker children’s hospital in Paris, where two more coronavirus tests were carried out.

By Tuesday, she was admitted to intensive care, and when Sabine visited, she found her daughter anxious, able to talk but exhausted, and complaining that “my heart hurts.”

“The door to her room opens, the nurses come in without wearing protective gowns, and the doctor gives me a thumbs-up sign telling me that everything is fine,” Sabine said.

It was getting late, so she told her daughter goodnight and went home.

A few hours later, the hospital called: one of the COVID-19 tests was in fact positive, and Julie’s condition had worsened to the point that doctors had to place a tube in her windpipe to keep her breathing.

“We can’t believe it, there has to be a mistake. And why did this result come so much later?” Sabine recalled thinking.

For Julie’s older sister Manon, the diagnosis was also a shock. “From the beginning they told us this virus doesn’t affect young people. We believed it, just like everyone else,” she said.

“At that point, I panicked. Some words, you just know what they mean,” Sabine said.

She and Manon rushed back to Paris, but Julie was dead when they arrived.

There was little time for mourning, and this would be the last time Sabine would see her daughter. Julie’s body had to be isolated immediately and her clothes and other personal items incinerated.

Sabine managed to hold on to her daughter’s baptism necklace and a bracelet.


To limit contagion risks, Julie’s casket will remain closed for the funeral which only 10 people will be allowed to attend.

“We were supposed to have a normal life.” — AFP

It's what WHO Director-General Tedros Adhanom Ghebreyesus had warned: "Although older people are hardest hit, younger people are not spared. Data from many countries clearly show that people under 50 make up a significant proportion of patients requiring hospitalisation."

"Today I have a message for young people: You are not invincible, this virus could put you in hospital for weeks or even kill you. Even if you don't get sick the choices you make about where you go could be the difference between life and death for someone else."

Malaysian youngsters, young and middle age men should think twice before throwing caution to the wind and go around playing football, sepak takraw, dancing, jogging, strolling in parks (wakakaka) or having a jolly at the local pub. 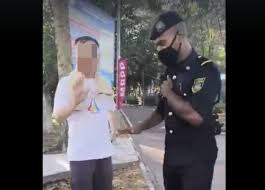 (2) WHO message to youth on coronavirus: "You are not invincible".