Zero's fiddling while our Rome burns

Indonesian students in Surabaya collect donations for victims of smog pollution during a protest to condemn the performance of President Jokowi's government after its first year in power. Photo: Getty Images


Bangkok: A conservation scientist has described an acrid haze choking parts of South-east Asia as one of the worst ever man-made environmental disasters, saying that it is affecting about 40 million people.

Eric Meijaard, an associate professor at the University of Queensland, warns the pollution levels of toxic carbon monoxide and ground-level ozone are "presently off the scale".

"Not only is there appalling human suffering, with hundreds of thousands of people ill and many dead, the fires are a massive economic cost to the Indonesian economy," said Professor Meijaard, an expert on Indonesia's forests who co-ordinates the environmental program Borneo Futures.

Thousands of fires caused by slash-and-burn farming have blanketed parts of Indonesia, Singapore and Malaysia for almost two months, forcing many schools to close and flights and international events to be cancelled.

Last month I posted Smoke gets in Indon's eyes, in which I had penned: 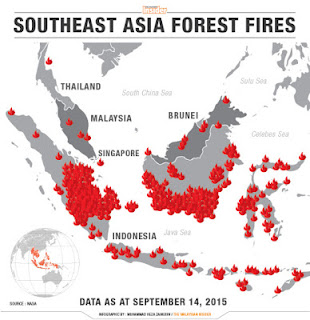 Indeed, it doesn't f* matter whether the companies are from Malaysia, Singapore, Thailand, Swaziland or Iceland. The forest fires causing humongous volumes of poisonous carcinogenic smoke and pollution to drift north to most of SE Asia (where Malaysian schools have been forced to close two days ago) are in, would you believe, the nation of Indonesia.

Indon then has either the unfounded and silly unhelpful pride to refuse Sing's offer to send aircraft to help put out the fires* - see The Strait Times' Jakarta declines help to fight fires, leading to us to suspect rather unkindly, whether she prefers to continue her chief export to Malaysia and Singapore - no thank you.

Okay, we're facing the worst cancer-causing pollution in 133 years since the explosion of Krakatoa on 27 August 1883, also of Indonesian origin.

The Krakatoa explosion was/is said to be akin to the 'volcanic winter' which was what caused the global climate changes of AD (CE) 535-536.

Wikipedia states: The extreme weather events of 535–536 were the most severe and protracted short-term episodes of cooling in the Northern Hemisphere in the last 2,000 years. The event is thought to have been caused by an extensive atmospheric dust veil, possibly resulting from a large volcanic eruption in the tropics, and/or debris from space impacting the Earth. Its effects were widespread, causing unseasonal weather, crop failures, and famines worldwide.

... and indeed the fall of several empires and civilizations.

It is not unlikely that in years to come, many of our people and those in Singapore, Brunei and Thailand, especially children, may become victims of cancer and other health sickness as a result of breathing in carcinogenic substances year after year from the Indonesian smoke haze which has been plaguing us.

Then there is the economic factor where Indonesian northern neighbours have suffered enormously incalculable losses.

Will these spell the eventual end of the hitherto hearty health of our Malaysian society if not our civilisation?

Apart from making some futile gestures and mild criticisms of the culprit, what have our 222 MPs been doing to deal with this gargantuan human disaster which is severely, nay, even fatally affecting our human and national economic problem?

They're f* busy quarreling among themselves over a relatively minor issue.