Over at RPK's Malaysia-Today one of his regular contributor Umar Mukhtar posted a piece titled
Signs of things to come: DAP is the boss of Pakatan Harapan. 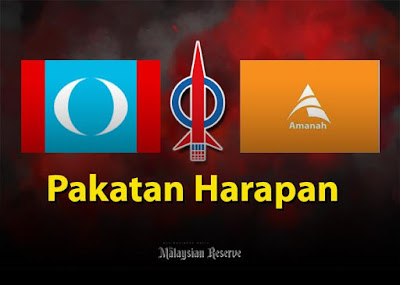 His article is about the opposition's proposed vote of no-confidence against PM Najib Razak in the coming parliamentary session, and that the DAP has been insisting on the Pakatan Harapan's appointed Chief to table that motion, and not for PKR's Petaling Jaya Selatan MP Hee Loy Sian to do so. The DAP suggested that Hee withdraw his submission.

Mind, Umar Mukhtar agrees with the DAP's argument that a parliamentary vote of no-confidence against the PM is no small matter, and indeed that should be tabled by none other than the Opposition Leader herself and not someone from the hoi polloi PKR corp of MP.

But nonetheless, even in agreeing with the DAP's stand, Umar Mukhtar wonders that for such an important parliamentary motion by the new Pakatan Harapan (PH), why hasn't PH meet over the issue to decide, for example, who does what?

But aha, he actually has the answer already and readily provides same as follows:

I guess DAP has not called for it yet. Until it does, nobody else is supposed to move.

Meanwhile, DAP just plays to the gallery and milks the silly situation through the social media. After all, to propagate after losing the vote will be an anti-climax.

But PKR did make a move and initiated an action. What upstart, some in DAP’s inner circle may say. Except that, being haphazardly led, PKR lost the forest for the trees. So a nondescript MP was asked to table the all-important vote. Surely it it was not his own idea!

In other words, the DAP as the alleged PH's de facto boss decides and Dr Wan Azizah, the putative or de jure leader of the federal opposition, shall obey, hence the title of his post. 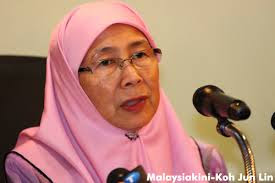 Umar also argues that PKR would be motivated to tremblingly obey (wakakaka) as it needs DAP support to survive the next general election, which to me is a completely new angle to how PKR had been behaving towards the DAP (and other allies) in the last two general elections and in particular the state elections in Sarawak, wakakaka - indeed, like the Imperator of Pakatan, wakakaka again.

Anyway, I welcome Umar's analysis in above paragraph and hope he's correct because it would be a nice welcomed change to see PKR behaving itself when it comes to issuing coalition policy, especially on the matter of seat allocation among coalition members, and not for it to make unilateral media announcements without consulting the DAP or Amanah (previously PAS) a la the Kajang Satay Folly, actions which usually result in the DAP screaming "WTF" on reading the newspaper headlines the following morning, wakakaka.

Oh, of course we also know that PKR is in desperate need of PAS support for GE-14, where its very survival as a political party in the next election requires cooperation in the Heartland from the Islamic Party.

Hence PKR is currently indulging in a politically bigamous behaviour, sleeping with DAP in legal matrimony while having an illicit raba raba affair with PAS, wakakaka.

Don't believe me? Please recall that we have been informed by Dr Wan and Azmin Ali that PKR will work with EVERYBODY, where I hope you appreciate the significance of the all-embracing word 'EVERYBODY', wakakaka.

Coming back to Umar Mukhtar's article I have to respectfully disagree with his allegation that the DAP has already and peremptorily seized or exercised power as the de facto head of PH, though it's a wonderfully titillating allegation in the current political situation, which the Italians have a phrase for, to wit, se non è vero, è molto ben trovato, which means (even) if it is not true, it is very well invented, wakakaka.

As if that wasn't enough grist to the mill, Umar went one step beyond by arguing that the DAP, being annoyed by PKR's Hee Loy Sian instead of Dr Wan tabling the no-confidence motion, further showed its displeasure through Tony Pua chiding PKR's Sivarasa over the latter's naughty advice (though some saw that as a warning) to Pua over the Sungei Way Deepavali bazaar petty traders' issue.

The Sungai Way Deepavali bazaar issue has been a completely different kettle of fish, in which Tony Pua had "... stressed in a statement that the local council, Majlis Perbandaran Petaling Jaya (MBPJ), should not negotiate with and bow to thugs who use force and intimidation to get their way ...", regardless of those involved who apparently included "... a PKR division deputy chief, a PKR division secretary and various PKR councilors from other districts ... who, in accordance with Pakatan's (or at least DAP's) C.A.T policy ... should not receive any preferential treatment just because of their party status.”

The chiding or if you like, wrist slapping (wakakaka) of Sivarasa was in regards to an issue separately from and totally independent of who in PH should be tabling the parliamentary motion. Hmmm, I have to say Umar has been rather cheeky or naughty in his attempt at weaving or intertwining the two different issues together to consolidate on his allegation of who is boss in PH.

The reality is not so sinister as Umar wants us to believe. My take on why the DAP had been unhappy that the motion to be tabled by the opposition leader was instead done by an apparently eager and quick-off-the-mark Hee Loy Sian rather than Dr Wan Azizah herself (a sentiment which Umar Mukhtar himself agrees that the DAP has been correct) has to do with a politically reluctant Dr Wan Azizah.

She is not known as a 'reluctant politician' for nothing. For a long time I sense, and indeed I'm not the only one too, she is not really enthusiastic about such politicking and I suspect Hee Loy Sian must have gallantly tabled that no-confidence motion to 'spare her the trouble'.

Surely a party MP wouldn't have tabled such an important motion all by himself without consultation with party leaders? And just to remind everyone, Umar Mukhtar agrees too because he wrote (see above): ... being haphazardly led, PKR lost the forest for the trees. So a nondescript MP was asked to table the all-important vote. Surely it was not his own idea!

We could argue from our experience with her mannerisms that she has only one single political interest, to wit, to free her husband from prison. It's a commendable tribute to her character as an admirable and devoted Muslim wife ...

... and, indeed also as a loving mother, as I had witnessed her on Aus TV (a decade ago?) when she was interviewed about Anwar Ibrahim's (initial) incarceration. Then she couldn't resist or couldn't help bubbling over what was a non sequitur during the interview (which was about Anwar and Malaysian politics). She beamed and proudly announced to the surprise of the TV interviewer that her daughter Nurul Izzah had graduated successfully in her engineering degree.

I and probably everyone viewing that Aus TV program could see the initial surprise on the face of the TV interviewer and then his total lack of interest (about Nurul Izzah's graduation). The bloke nodded perfunctorily though he was gracious enough to congratulate her but in a manner which left no doubt that he wanted to return to talking about Anwar the politician rather than Nurul the newly graduated engineer.

Some time not too long ago, it has been said that she had been having (maybe still has?) much problems in looking after her federal and state constituencies, respectively Permatang Pauh and Kajang, as there were numerous complaints against her and her alleged absence from her constituencies by local residents. She was referred to as a 'sleeping YB', an unfortunate title held earlier by AAB.

Following several attacks by BN pollies on her non-performance as a MP and ADUN, both Azmin Ali (PKR) and Lim Guan Eng (DAP) offered to look after Dr Wan’s constituencies.

But our dear Mukhriz Mahathir wasn't satisfied with that, stating quite correctly: “I’m perplexed about that too because usually a Member of Parliament will be responsible for her own area, she can’t be depending on other people.”

“So that, to me, proves that they don’t really understand the responsibility and role of a Member of Parliament.”

“A representative in a parliamentary seat is a heavy responsibility. They have to look after the people and speak up for them in Parliament. That’s why when you want to choose your representative here ... most important thing is who among those contesting can defend your rights.”

Oh the poor lady, and she only wants to be a good wife and mum.

I suspect the only reason she is still appointed Opposition Leader of PH is:

Sorry Datin, you may be reluctant but your country coalition still needs you, wakakaka.