The woman who would be king ... maker? 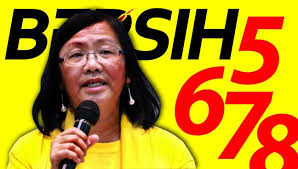 Asked to respond to questions regarding PAS’ exclusion, Khalid said that while it was entirely up to the Islamist party to join or shun Pakatan Harapan, the new coalition could neither wait for it to make up its mind nor plan for it.

“Pakatan Harapan can’t wait because it is not something new but a continuation of Pakatan Rakyat and the sooner we get together re-endorsing our commitment to form a new government the better,” he said.

A news report yesterday quoted Chin as saying Pakatan Harapan was launched before the three component parties – DAP, PKR and Amanah – had come up with anything concrete to offer Malaysians as an alternative to Barisan Nasional (BN).

As I once penned, Bersih under Maria Chin Abdullah has gone off track from the NGO's objective of clean and fair elections.

Let's recollect what Bersih' objectives as laid out in 2011 have been. They are:

Is it Bersih 4.0's charter to depose of an elected PM?

Personally I suspected so when Bersih in the person of Maria Chin Abdullah saw it fit to praise a former RMAF officer as a hero, and for what you may asked, but for violating Armed Forces Council Instructions, yes, VIOLATING military instructions. That's Maria Chin's perception of a hero!

I had then remarked that unless someone wise up this new chairperson of Bersih the organization will soon lose its perspective, and sadly with that, all the investments made by Bersih's former leader, Ambiga Sreenevasan, which had earned Bersih 2.0 much respect and admiration, would be squandered completely by Maria Chin's new Bersih leadership.

The NGO is no longer about clean and fair elections. It has now become a mainstream political organization which seeks to depose of an elected PM. It now has only one honorable recourse - it must register itself as a political party.

Then, as if Bersih 4 had not been enough, Maria Chin Abdullah had subsequently also wanted to lobby MP to vote against Najib.

That's fine but at least she should, as I had recommended, register Bersih appropriately as a political party since she has effectively changed the NGO (about clean and fair elections) into that.

Yes, Maria Chin Abdullah must make up her mind, whether to be politically active at the sharp end or to remain head of a neutral NGO which campaigns for fair and clean election.

If she intends to be head of Bersih, meaning the latter, then she should bloody well mind her own business as to whether Pakatan Harapan has been hastily formed or otherwise.

She seems to be either a confused activist which has been why I see Bersih 4.0 as a confused NGO, or as I suspect, she wants to be a political KINGMAKER, one who wants to change PM, one who pontificates pompously on the timing of Pakatan Harapan's political formation as if that's her business, one who ... god only knows what she wants next?