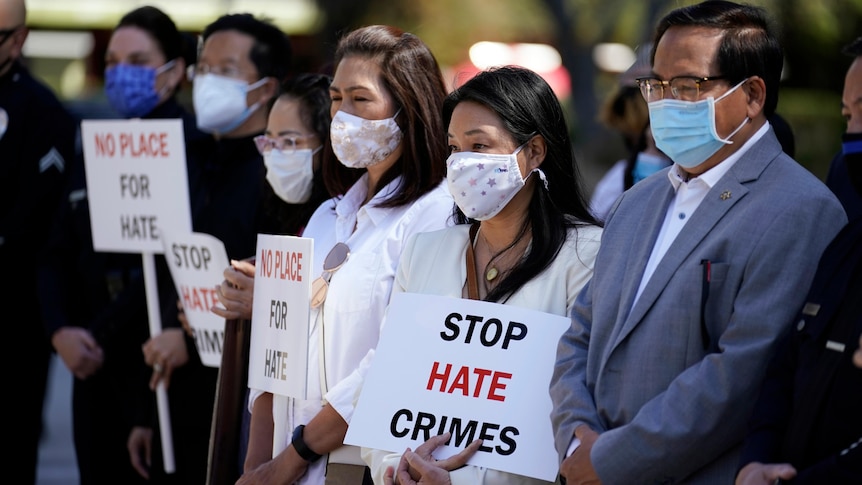 US community groups are alarmed by the rise in anti-Asian violence this year.
(AP: Marcio Jose Sanchez)

An Asian-American woman has been attacked on the streets of New York City by a man who repeatedly kicked her in front of witnesses who seemingly stood by, according to surveillance footage.

NYPD says there have been 33 hate crimes with an Asian victim so far this year in an alarming spike in attacks of members of the Asian-American or Pacific Islander community.

It follows the mass shootings in the US state of Georgia earlier this month in which eight people died at spas in the Atlanta area, six of them Asian women.

US President Joe Biden has deplored the surge in anti-Asian violence, saying last week that "hate can have no safe harbour in America".

In the latest incident, the woman was walking in midtown Manhattan when a man came up to her and kicked her to the stomach, knocking her to the ground.

The NYPD said the man then stomped on the woman's face several times while hurling anti-Asian sentiments at her.

He later casually walked away, the footage shows.
According to the CCTV video, a man inside a building lobby seemingly stopped what he was doing to watch the assault.
Later, two more men wearing blazers walked into the frame and one of them closed the door as the woman was on the ground.

The property developer and manager of the building, Brodsky Organization, said it was aware of the assault and the staff who witnessed it were suspended pending an investigation.

The NYPD's Hate Crime Task Force is investigating the attack and has asked anyone with information to contact the department, offering up to $US2,500 ($3,285) as a reward.

Police Commissioner Dermot Shea previously said the agency would increase its outreach and patrols in predominantly Asian communities amid a national spike of anti-Asian hate crimes.

It says that number is "only a fraction of the number of hate incidents that actually occur".

Hate crimes against Asian-Americans have been on the rise since the beginning of the pandemic early last year, the report found.