Sometime back I began to have real concerns about Khalid Ibrahim. In fact I became quite disgusted by his naughtiness which I blogged in Selangor saga shows PKR's ketuanan mentality? based on my letter to and published by Malaysiakini. 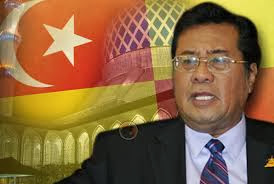 I will focus on only the part, regarding the controversial selection of the Selangor exco after the last state elections, which wakakaka criticized Khalid Ibrahim, as follows:

Leaving aside the alleged involvement of the palace, it was painfully noticeable that Khalid Ibrahim did what would be considered ungentlemanly before he left for abroad, in unilaterally announcing via just a cowardly tweet the revised composition of the Selangor exco, which saw the agreed four exco positions for DAP [unilaterally] reduced to three.

Thus it left Tony Pua, DAP Selangor deputy chief, bewildered on what was obviously an overturning of a Pakatan agreement on the exco composition. And of course Khalid Ibrahim was conveniently not around to answer why there was a change to DAP’s disadvantage.

But from HRH’s revelation via his private secretary that Khalid Ibrahim had submitted the exco nominations to the palace prior to his departure for overseas, it would suggest that his tweeted message had already reflected the list submitted to HRH, lending doubts as to whether there was even a second list with the 5:5 racial ratio [as was claimed].

Be that as it was, even if HRH required a 6:4 makeup in the state exco, that would have been easily fulfilled with the four PAS members and two from PKR, which would still allow DAP to staff the exco with four of its assemblypersons [as agreed prior to Khalid's unilateral amendment].

Why then has DAP’s exco members being reduced to three?

That has been because Khalid Ibrahim wanted Elizabeth (Eli) Wong in the exco as well. Eli Wong is very well regarded within her party or at least within Khalid Ibrahim’s faction. She has been undeniably a commendable and very hard working exco member in the previous state parliamentary session and is obviously a favourite of the MB because she has been totally loyal to him, not unlike Faekah Husin.

But alas, Eli Wong is not a Malay in our very race-conscious world, and unless the Selangor exco could be expanded to eleven places to accommodate her, she could only be admitted at the expense of a non-Malay position, which obviously has to come from the DAP’s allocation of four.

Regarding Eli Wong appointment because of her loyalty to Khalid Ibrahim, it's ironical that in the previous exco term (formed after the 2008 state elections), during her greatest moment of support especially from her own party, her boss Khalid Ibrahim abysmally showed his moral and leadership spinelessness in not immediately coming forth to support her, a victim, but instead, contemplated casting her aside as if she was the wrong doer.

In Susan's [my matey Susan Loone] latest post I weep over Eli Wong’s resignation she wrote:

This blog mourns for Elizabeth Wong, the Bukit Lanjan state assembly woman who has been pressured to resign because of nude pictures of her being publicly distributed.

The person(s) who did the act of taking her pictures without a consent and distributing it continues to enjoy impunity.

I know it was the party she represented - PKR - who asked her to resign. And that to me, may be a strategic but a most disheartening thing to do.

It gives credence to gutter politics, to sleaze and evil politicking, within and without the party.

As a woman and friend of Eli Wong, I weep over what has happen to her. It will take me some time to recover for sure.

Yes Susan my dear friend, we are devastated as well, including my matey Dean Johns who penned in his usual Malaysiakini column Elizabeth Wong resigns - right or wrong? these sad words: And a sign that, as painfully stripped of her confidence as she must be feeling right now, Wong would be wrong to resign.

Blast PKR for its gutlessness, for being worried about the rumoured ethno-religious mix surrounding the issue of Eli’s victimisation.

Instead of looking after Eli during her most vulnerable period, their top [PKR] brass have been looking over their shoulders, more concerned about the impact of this issue on the heartland’s support (which they prefer than the current urban support they enjoy), and also fearing that their PAS partner with their conservative tight ass morality, may be repulsed into UMNO’s arms.

These senior party members (you know who) want Eli to preferably disappear from the face of the earth, but if not, then to resign and, to put it cruelly, bugger off.

Forget about her loyalty, service, and dedication to the party. She has now become a liability to PKR.

Scat Eli, except they again lack the guts to say it – instead, ‘persuading’ her to tender her resignation, when earlier she had already stated resolutely she was not going to cave in to such contemptible smearing.

Oh, the pressure she had been subjected to, the betrayal, the lack of support – can you understand why she broke down into tears?

But wait, the best-laid plans of mice and men often go awry.

The Malaysian Insider reported in Eli could remain assemblyman, but exit exco because those spineless Wonders now realized how blooming popular Eli is, and are shit scared of the no-no move of accepting Eli’s resignation.

Eli’s supporters and those very sympathetic to her cause may be so pissed off that they will desert the PKR banner.

But Khalid Ibrahim seems still keen to see her go, stating: … Wong was a victim but her willingness to resign from all posts is a selfless decision on her part to protect PKR because she is well aware that BN will continue to exploit the issue to damage the party.

And of course he would seek the advice of the Sultan of Selangor before making any decision. Mr Wannabe-Teflon!

In that sorry event in 2009, instead of coming forth as a courageous and resolute leader in the mold of Pak Haji Nik Aziz, Lim Kit Siang or Zaid Ibrahim to demonstrate his unreserved support for Eli Wong, a loyal PKR exo but a severely traumatized victim, the cowardly MB scurried to 'seek advice' from HRH, which was perceived as an excuse to abdicate his MB/leadership responsibility for his PKR ADUN.

Yes, after his successful first term as MB Selangor, I suspect Khalid Ibrahim has shifted his political loyalty (note I have written 'political' and not 'subject' loyalty) from PKR to HRH. Perhaps he must have found far greater comfort in presumably HRH's liking (and even protection) for him.

Of course, to be fair to RPK and not to mislead you (by naughty misinterpretation) as to the thrust of message, you would have to read RPK's post in its entirely to see the context of his statement above.

I've only reproduced it to serve as a starting point (titik tolak) for my take on Khalid Ibrahim's recent lamentable behaviour (meaning it's kaytee's opinion and not that of RPK).

Yes, Khalid Ibrahim has found his comfort zone as the Selangor MB, more so after the recent 2013 MB appointment when he has not only enjoyed HRH's approval but was nominated by both Selangor's PAS and DAP (the latter which he ironically stabbed in the back in order to favour Eli Wong's appointment as a non-Malay exco).

To put it in kaytee's words, Khalid Ibrahim has discovered his personal 'enlightenment', perhaps that in the state of Selangor and under HRH's aegis, he is indispensable, irreplaceable and 'almost' presidential in stature - 'almost' because he still knows he must not be too big-headed to believe he could do without HRH's favour.

Khalid's pathetic pseudo-presidential declaration so irate DAP's Gobind Singh Deo, son of my hero Khai Karpal, that he 'urged' (a polite euphemism for 'f**king demand', wakakaka) the Selangor MB to bloody well clarify the statement that he 'listens to criticisms from the people more than from party leaders and politicians'.


Gobind said: "Khalid must not take things for granted. I ask him to respond and clarify matters."

... and that he 'listens more' to unknown, unquantifiable 'his so-called people'.