Lee Hwa Beng (MCA) was Subang Jaya's state assemblyman for three terms from 1995 to 2008, and guess what happened in 2008, wakakaka. He was appointed Port Klang Authority chairman from 2008 to 2011 to investigate the PKFZ scandal; he was also the author of 'PKFZ: A Nation’s Trust Betrayed'.


In an article he wrote for TMI titled How will MCA fare in the coming election? he predicted MCA could well lose up to 2/3 of its current 15 federal parliamentary seats, though he refused (said it would be inappropriate) to identity which seats MCA will lose.

Needless to say, the current focus of keen political observers (both professional and amateur) is on Johor and the MCA-held parliamentary seats like Gelang Patah. 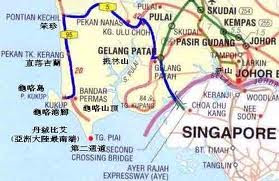 That DAP's Lim Kit Siang will be the Pakatan Rakyat's candidate in Gelang Patah is no longer the question, though many Pakatan supporters revel in the possibility of Uncle Lim standing there as a candidate under the PAS banner in the event the Registrar of Societies (RoS) decides to suspend or de-register DAP. In fact I dare say they fantasize and hope for that possibility which in one fell swoop would destroy UMNO's demon-ization of DAP as an anti Malay-Muslim political party.

In what we suspect to be UMNO possible plan to 'persuade' ROS to suspend DAP just prior to the election, so as to save its subordinate, MCA, UMNO could well be digging for itself a far deeper cesspool than it currently wallows in, and which its plummeting into may be non-salvageable.

The picture of a pro Malay-Muslim DAP to the Heartland may just make UMNO think twice, unless it's so monumentally stupid, a state of mind most unlikely but which we mustn't completely discount.

However, the question of the MCA candidate in Gelang Patah, purportedly Tan Ah Eng, continues to intrigue political observers and KPCs (kay poh chnee or busybodies, like kaytee, wakakaka).

Will CSL step in a la Lee San Choon in Seremban in 1982, to put his leadership 'money' where his mouth is, to re-enact a second MCA vs DAP Clash of the Titans, which Lee San Choon won for the MCA in the 1982 general election when he defeated Dr Chen Man Hin (DAP). 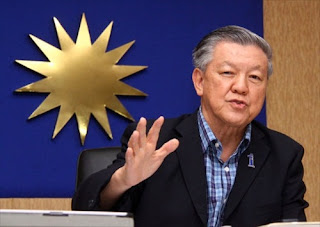 'Twas then a historic event in what the Chinese would term an MCA leader courageously entering the DAP's haw siew (tiger lair, meaning stronghold) - a case of dare to say, dare to do!

Two years ago, MCA president Chua Soi Lek announced that the MCA will not accept any Cabinet positions if the party obtains fewer than the existing 15 seats. This statement was made nearly two years ago when he first became MCA president but has not been repeated since.

Was he trying to blackmail the Chinese community into considering carefully before voting against the party? Was he more confident of a better performance then? His subsequent silence may mean he has either regretted his statement or that he is less confident of his party’s performance in the upcoming elections two years later.

CSL's merajuking reminded me of Koh Tsu Koon who told Penangites pretty much the same thing, that he won't enter government if he lost his bid for the Batu Kawan federal seat, and which he did to Dr Rama (DAP), ... but which nonetheless saw him subsequently and shamelessly accepting a ministerial position via the Senate back door, to become the Assistant (disgracefully only an assistant) Headmaster of Report Cards for BN ministers and officials.

Anyway, 'nuff of Koh TK and back to CSL and MCA, for the story of MCA is also the story of Malaysians of Chinese ancestry, and perhaps vice versa

The questions we want to ask are:

(a) Will CSL stand in Gelang Patah?

(b) Will his merajuking tactic convince the Chinese, especially those in Johor, to give the MCA a 'second-illionth' chance in GE-13 or suffer no Chinese representation in the new Malaysian cabinet? - A threat we may describe as the 'MCA Merajuking Manoeuvre'.

Only CSL can answer the first, but for us to obtain an answer to the second query, we need to revisit the history of the MCA, in particular that of its leaders - and I'll try not to be tng k'ooi (chong hei) wakakaka.

The leadership tussles in MCA

The MCA was formed on 27 February 27 1949 with support from the British colonial government who hoped for the Chinese association to manage the social and welfare concerns of the rural Chinese interned (not unlike Japanese POW's) under the Briggs' Plan in the 'new villages' during the Malayan Emergency.

Among the top leaders were Kuomintang  (Guomindang) Party people, wakakaka. Presumably it found favour with the Brits and UMNO because it was undoubtedly anti Communist.

Right from its very start, MCA has been a party rife with leadership tussles. Lim Chong Eu who became its President after defeating Tan Cheng Lock in 1958 demanded that Tunku treat the MCA as an equal partner, and demanded 40 seats instead of the 28 it was allocated. Lim also wanted Chinese recognized as another official language of Malaya.

Tunku went as far as increasing MCA's allocation from 28 to 31 but rejected Lim's other demands. Then, in what was alleged as a political war by Tunku against Lim Chong Eu using a surrogate, pro UMNO Tan Siew Sin, he applied both external pressure (by UMNO) as well as internal pressure (by Tan Siew Sin's pro UMNO faction in MCA) until he manoeuvred Lim Chong Eu into resigning from MCA. Tan Siew Sin took over as MCA president and became and remained UMNO's favourite and respected partner.

My uncles who served in the military told me that apart from the PM, DPM and Defence Minster, the only 3 ministers who were entitled to salutes by military officers, Tan Siew Sin was also to be so honoured by the armed forces and police. Tun Abdul Razak personally issued that directive of exception, such was his respect for Tan Siew Sin.

I reckon Tan was probably the only and last MCA leader to be liked and respected by UMNO top leaders. Maybe Mahathir might like Ling but I wonder whether he respects him?

From there, the bitter leadership tussles continued as per the following (in brief extracts):

Let's concentrate on the two which were post May 13 1969. Both Lee San Choon and Ling Liong Sik did much for Chinese education, apart from other achievements. For example, Lee launched Kojadi, a scholarship fund, and expanded TAR College massively. Ling consolidated as well enhanced the Kojadi scholarship loan scheme while launching the Langkawi Education Project. It's said his most significant contribution to the community and country was the establishment of Universiti Tunku Abdul Rahman (Utar).

Time and time again, kaytee has stated that education is a central pillar of Chinese culture. I wonder whether those two MCA presidents had relatively long periods of reign in their parties because they saw fit to focus on Chinese educational concerns.

Of the two, the former, Lee San Choon, was disliked by Mahathir but who like(d?) the latter.

The popular rumour among Chinese was that Lee San Choon was allegedly 'told' by Mahathir he should leave, this despite the MCA winning well in the 82 general election, increasing its federal seats from 17 to 24 at the expense of DAP.

Legend had it that Lee decided to do it in style, just to (figuratively) jab at Mahathir in the nose before he left. He deliberately chose to stand in Seremban, a DAP tiger's lair (haw siew) to show (i) the MCA still had Chinese support, and (ii) he an MCA politician didn't have to stand in a Malay-majority constituency to win

He wanted to demonstrate his independence of UMNO's patronage, by being different from the usual MCA and Gerakan politicians who since 1969 had had difficulties or faced impossibilities winning in Chinese-majority constituencies - indeed, a shameful indictment on those so-called Chinese parties.

Lee San Choon won Seremban but, presumably having proven his point with a two-finger salute to Mahathir, left almost immediately after his victory - Dr Chen then won Seremban back in the by-election.

A year later, in 1983 he told the Chinese edition of Asiaweek (04 September issue): “We wanted to prove that the MCA did not need to rely on the support of the Malay leaders (UMNO) to win so that the government will take us seriously. Although I manage to beat Dr Chen [Man Hin] winning was not easy. UMNO leaders stabbed me in the back. There were not many Malay voters who supported me as they did not like the way I did things.”

Thus, we can see only 3 MCA leaders left either the party or the coalition with some honour, namely:

(a) Lim Chong Eu, who failed to convince his own MCA party to back him in his demands to Tunku for UMNO to treat MCA as an equal partner in the Alliance coalition (Perikatan) and for Chinese (Mandarin) to be recognized as an official language of Malaya,

(b) Tan Siew Sin, who took his MCA colleagues out of the cabinet following the party's disastrous results in the 1969 election, and

There was a moment prior to 2008 when I had imagined that Ong Ka Ting might do a Lee San Choon and stand in Bukit Bintang, but wakakaka, I was probably imagining under the influence of Mr Walker (Johnny Walker that was, wakakaka).

So we can see the MCA presidents who did stay long as party president were those (Lee San Choon and Ling Liong Sik) who paid some attention to Chinese education, or Tan Siew Sin who was liked and respected by UMNO leaders - these apart from their party scheming and manipulations, wakakaka.

Will Chinese vote MCA for voice in government?

We also can opine that some Chinese Malaysians have voted MCA for years because they wanted Chinese representation in the cabinet. However, in the north the uniquely Chinese Penangites' previous strategy was to vote DAP to federal parliament to 'make noise' for Chinese rights and to vote MCA (or Gerakan) to the state assembly for Penang's local development.

Anyway, will CSL's threat work, that of MCA staying out a la Tan Siew Sin if the Chinese do not vote MCA in GE-13 to enable it to win more than its current 15 seats? Will his 'MCA Merajuking Manoeuvre' work?

In kaytee's humble opinion, I think not for two reasons, as follows:

(a) there is a new generation of voters who don't give a f* about Chinese representation in cabinet because they have different values from Chinese of an earlier generation. These new Chinese voters are more into human rights as well as to throw out what they see as a corrupt BN than the Chinese traditional and pragmatic concerns for their daily '3 bowls of rice'.

(b) the Chinese also believe that post GE-13 they will be represented in a Pakatan Rakyat cabinet so voting MCA out actually supports their belief. And this represents the principal difference between earlier elections and the pending one vis-a-vis the threat of CSL's 'MCA Merajuking Manoeuvre'.

Previously the only likely government after an election would be one from the BN coalition, whereas today the Chinese reckon (correctly or incorrectly) that there may be a Pakatan alternative.

Thus, I do not believe CSL's threat will have impact on the thinking of Chinese voters.
Posted by KTemoc at 2:32 pm