Impatient, arrogant, power crazy - harsh words - all directed at Zaid Ibrahim, the alleged desecrator of the Holy of Holies, the very person of Anwar Ibrahim.

To PKR supporters, criticizing Anwar Ibrahim, let alone asking the great one to leave PKR, is not a done thing. It’s akin to blasphemy.

Alas, instead of understanding why Zaid had gone super ballistic in his disdain of the de facto PKR leader and in general the PKR leadership clique, so as to be able to take stock of possible pre 13th GE weaknesses, no, Zaid was straightaway labelled as an UMNO mole, a Trojan horse, a snake, a frog, a running dog and every conceivable mammalian or reptilian creature that lives under the Malaysian sun, and beyond. These harsh, hostile and irrational treatments are reserved for anyone who dares to criticize the PKR icon, Anwar Ibrahim.

Anyway, what’s wrong with Zaid, as seen from my non-anwarista’s eyes wakakaka?

Years ago my class was taught by Mr Pillai, English teacher extraordinaire, about the idiom "don't suffer fools gladly". And another teacher, Miss Ong, our religious knowledge teacher revealed to us that the Mr Pillai’s idiom was a derivation from the sarcasm of the Apostle Paul as expressed in 2 Corinthians 11:19 (King James’ Version): “For ye suffer fools gladly, seeing ye yourselves are wise.”

I suspect this to be the feelings of Zaid Ibrahim in his recent struggle with vested interests among some members of the PKR leadership. He was appalled by what he came to know of the PKR party polling process, that it was rigged, the polling officials lacked impartiality, and ballot papers were mishandled. He made his complaints, calling for the polls to be aborted and for the polling system to be reviewed. He wasn’t the only candidate to do so.

Despite hundreds of complaints from other PKR candidates and branches, the JPP, PKR election committee remained bizarrely silent. When Haris Ibrahim of the People’s Parliament blog, handed over a PKR ballot paper for the party's deputy presidential contest to Dr Molly Cheah, the chair of PKR JPP, she responded that was the first she knew about. But what has she done about that?

RPK praised Dr Molly Cheah as an honest person. I’m sure everyone agrees with that, but Malaysiakini journalist Terence Netto wrote about Dr Cheah’s cluelessness and lack of know-now in her role as the principal monitor of the PKR party elections. Her personal honesty was not enough. She should have taken a more assertive participation rather than (as we understand from Haris) leave it to the party secretariat to do her job.

Anwar Ibrahim claimed that PKR had answered Haris Ibrahim’s query on the ballot papers. But Haris pointed out that the explanations by the party secretariat (mind you, not the JPP) did not answer how he (Haris) came to be in possession of the PKR ballot paper, regardless whether the ballot was 'old' or not. It was frighteningly available to Haris, a non-PKR member! 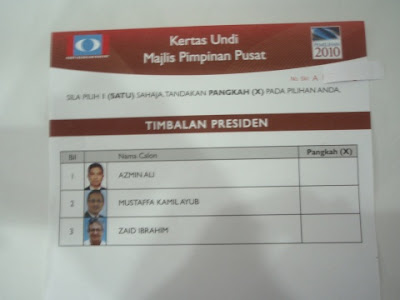 The PKR top leadership seems hell-bent on bulldozing the polls through to its conclusion, as planned, regardless of complaints from candidates (Zaid and Mustaffa Kamil), party members (Jonson Chong and other branch leaders) and independent observer (Haris Ibrahim).

In the face of such stonewalling, Zaid Ibrahim, the type who suffers no fools, had probably become more riled by the nauseatingly noxious noisome jeers from the anwarista praetorian guard. Did that egg him on to greater and more daring insults of the so-called refomasi icon? Who knows? It was the inevitable cycle of mutual insults which developed into a beautiful but highly destructive vortex.

This was a man who resigned his ministerial post in protest against the use of the ISA against Teresa Kok and Raja Petra Kamarudin and a sweetie reporter, not one who had to be chucked out of UMNO screeching, screaming and taking to the streets. Zaid does not suffer fools gladly.

Of course it was to the relief of the Anwar-Azmin camp, and as the anwaristas would have exclaimed, good riddance to bad rubbish.

But everyone knows the PKR polling process was tainted. Haris Ibrahim questioned the party’s secretariat for running the show instead of the JPP. It would be akin to UMNO running the general election process instead of the Election Commission. Free-Malaysia-Today reported phantom voters in PKR’s Kelana Jaya division early last month. There was more, please read on!

Haris Ibrahim wrote in his post Indeed, who is lying of his informant telling him the PKR returning officer attending an election could manipulate the list of members, where if voter turnout was low, the numbers could be adjusted upwards with additional ballot papers dropped into the ballot box.

Haris also was informed by Rashid Azad Khan of phantom voters in Kubang Pasu, where Zaid’s polling agent reported that the voter turnout in Kubang Pasu was only 84, yet the result mysteriously showed Azmin winning with 80 votes while Zaid obtained 76, a total number exceeding the actual turnout by 72 votes. Shades of the phantom voters that PKR had blamed UMNO for!

Rashid also pointed out that there was a 30-minute blackout immediately after the election ended but candidates’ agents were not allowed into the polling room, at a time when the ballot boxes were still not sealed. He also mentioned an election officer was caught on camera wearing Azmin’s campaign badge, raising questions over the officials’ impartiality.

The gravest indication of the questionable polling process came to light after Zaid’s agent lodged a complaint on the extra 72 votes as well as his exclusion from the polling room during the blackout. Rashid Azad Khan said the party election monitor decided, probably in the face of such damning complaints, that the Kubang Pasu result should be a tie of 81 to 81.

Undoubtedly, in the annals of Malaysian election experience, it was an amazing, bizarre and unprecedented decision, where the election official not only raised the total votes cast to 78 above the actual turnout (instead of the earlier extra 72 votes), but could rule arbitrarily on a fairy tale result, from the earlier dodgy 80 to 76 to an outrageous fabricated nonsense of 81 to 81.

According to Haris Ibrahim, Rashid Azad Khan also confirmed that the Zaid team have evidence in hand of the fraud in Kubang Pasu and had communicated this to Saifuddin, the party's secretary general. Rashid says that Saifuddin promised to see them but has reneged on the promise to this day. Well, Saifuddin needn’t worry about his broken promised anymore now that Zaid has left!

The result of Azmin Ali becoming the new deputy party president is no doubt inevitable. But technically at this moment he isn’t yet as the polls hasn’t concluded. He’s only a party VP, yet at the Selangor party rally last night his face beams from the most prominent position in the giant poster on the main stage of the Shah Alam City Council auditorium. VP Azmin Ali occupied the central premier position, flanked by Anwar and I believe, Khalid Ibrahim. 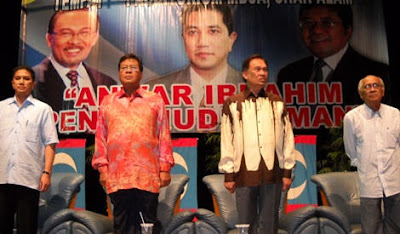 Tell me, which political party in the world provides the leadership positon in a group poster to a mere vice president? Yes, only PKR!

It’s clear who will be is the real power in the party, and Anwar and Azmin don’t believe in being subtle anymore.

As blogger Aizuddin Danian, the blogger of Volume of Interactions wrote: ... the whole purpose of the elections was to reinforce the charade that PKR was not UMNO. In the perfect irony, the elections have shown everyone that PKR and UMNO are actually very much alike. From the heights of GE12 in 2008, the darling of the electorate everyone expected to make further inroads in GE13 is now being spoken of in cautious tones. The turnaround is almost complete, and instead of GE13 being the litmus test of BN's rule (as it should be), the people are now wondering instead if it would be better to use the next elections to show their displeasure at how poorly PR in general and PKR in particular have performed. How the tide has changed.