Kofi Annan has condemned an Israeli air strike that killed more than 60 Lebanese and reiterated his previous calls for an immediate ceasefire.

The UN secretary-general spoke on Sunday at an emergency meeting of the Security Council that he convened after the Israeli air strike in Qana.

"I am deeply dismayed that my earlier calls for an immediate cessation of hostilities were not heeded," Annan said.

"I repeat this call once again from this chamber and I appeal to the council to do likewise."

"Action is needed now before many more children, women and men become casualties of a conflict over which they have no control."

THE 19-day-old war in the Middle East has reached a turning point, with Israel's deadliest attack yet killing 54 people in southern Lebanon and the United States declaring it is time for a ceasefire. 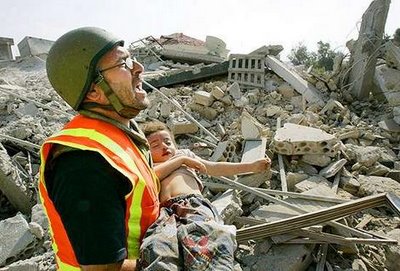 Lebanon's Prime Minister, Fouad Siniora, yesterday cancelled talks with the US Secretary of State, Condoleezza Rice, until a ceasefire is enforced.

Early yesterday morning an Israeli aircraft bombed the three-storey building in Qana crowded with sleeping civilians. Many were refugees displaced from further south. Mothers embraced their dead children and joined rescuers to retrieve the bodies. Sixty-three people had been sheltering in the basement.