FMT - Bersih 2.0 to march on with fifth rally 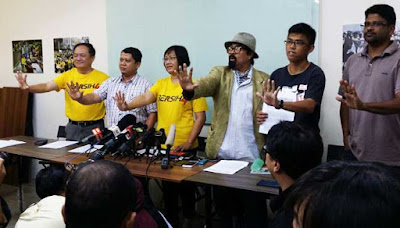 PETALING JAYA: Bersih 5 is a go.

Electoral watchdog Bersih 2.0 today confirmed that the impending rally was to protest the government’s continuing “denial and inaction” over the 1MDB scandal.

This is especially after the United States Department of Justice (DoJ) had filed civil suits to recover billions in assets with funds allegedly misappropriated from the state-owned investment firm.

Reading from a prepared statement, Bersih 2.0 chairperson Maria Chin Abdullah said they believe that “not protesting is not an option”.

The rally – the date and details of which will be announced in due course – is meant to pressure Putrajaya for greater accountability, she explained.

“As citizens, we must make a strong stand against this grand corruption and betrayal of trust.

“There is a serious dereliction of duty by the Prime Minister and the Cabinet members who are entrusted to protect the interest of the people.”

Under Maria Chin Abdullah the Bersih NGO has gone songsang from its avowed charter, the very purpose of its existence, that of keeping elections free, clean and fair.

Now it has even become an anti 1MDB movement (more correctly an anti Najib show), and just what has this got to do with free, clean and fair elections?

If you read above FMT article, Berish is described precisely as an electoral watchdog.

Yes, it has been Maria Chin who has, for reasons only known to her, radically changed Bersih's role after she took over from Ambiga Sreenevasan.

Should she be doing that? Can she do that?

Of course yes, Maria Chin Abdullah is free to do what she wants to do (within the law) but she should NOT have misused the Bersih label to carry her personal (political) baggage, which is what she has already done.

Bersih should be left untainted as a pristine politically non-aligned electoral watchdog, so as to enhance the weight and credibility of its words and findings on electoral fairness, cleanliness and accountability. But now that Maria Chin Abdullah has turned the NGO into an anti Najib or anti 1MDB organization, who in UMNO or BN will ever believe Bersih's opinions or/and advice on free, clean and fair elections in Malaysia?

In pre-Maria Chin days, once Anwar Ibrahim attempted to hijacked Bersih but Ambiga Sreenevasan told him off, reminding him that Bersih was about electoral fairness, cleanliness and accountability and not for Pakatan to misuse as a political platform.

But that didn't stop Anwar because in Bersih 3.0, unfortunately Anwar and his sidekick Azmin hijacked it, when one of PKR members deliberately breached police barricades leading to ferocious police reactions. Both sides (Police and Anwar-Azmin's tribe) were sadly bloody wrong.

Let's revisit that scene but by starting off with a review of what Bersih is/was supposed to be.

Wikipedia tells us (just relevant extract):
The Coalition for Clean and Fair Elections (Malay: Gabungan Pilihanraya Bersih dan Adil) or Bersih (meaning clean in Malay) is a coalition of non-governmental organizations (NGOs) which seeks to reform the current electoral system in Malaysia to ensure free, clean and fair elections. […]

In April 2010, the coalition was relaunched as an entirely civil society movement ("Bersih 2.0") unaffiliated to any political party.

I hope you understand what I mean by 'gone partisan' from a political perspective.

Now, it makes an electoral watchdog such as Bersih 2.0 encumbered with the baggage of political partisanship (burdened by Maria Chin Abdullah) which will make the NGO task of ensuring free, clean and fair elections far far far more difficult if not impossible, because the BN side of politics (I include PAS within this group) will not believe any of its so-called non-aligned words.

I first suspected Bersih had gone songsang from its original charter when Maria Chin Abdullah praised a former RMAF officer as a hero, and for what you may asked, but for violating Armed Forces Council Instructions.

That former RMAF officer was actually not charged by the military for making a police report on the very delible so-called indelible ink provided by our remarkable EC as many have incorrectly believed, but for doing unauthorized song & dance announcements in front of the media. No military personnel could do such a thing whether it involves the election or any other matter. That RMAF officer's wife (also a RMAF personnel) who similarly made a police report on the EC provided ink but did NOT speak to the media was not charged.

Maria Chin Abdullah lacked judgement in over-hastily praising a military officer who had violated military instructions. I had then wondered how would such a person who lacked judgement and balance be able to make informed opinions and advice on electoral reforms. She gave me the impression then she was just anti establishment.

Indeed, then I knew that unless someone wises up the new chairperson of Bersih, that organization built up to such a high reputation by Ambiga Sreenevasan would soon lose its perspectives on what its role actually is. 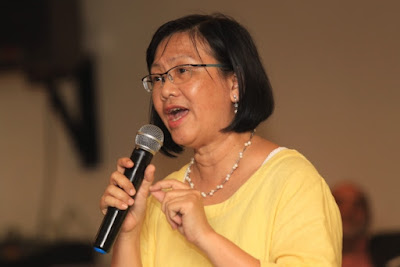 More than ever, for Bersih to seek to reform the current electoral system in Malaysia to ensure free, clean and fair elections, it must not, nay, NEVER ever encourage the military to get silly ideas of going political - keep those soldiers back in the barracks. Don't believe me, ask Yingluck Shinawatra.

Okay, you may think all the above are just kaytee's prattle tattle, wakakaka, but let's take a look at an article posted in the renowned loyarburok website, where we would be able to read Why I Will Not Attend Bersih 4.

It was written by Abdul Haleem, a Bersih-rally veteran, telling us of Bersih's double standards in not taking a strong stand against PKR's nonsensical misuse of the election process in the Kajang Gate by-election (I call it the rancid Kajang Satay event), yea, not even a slap on their wrists with a coriander stalk wakakaka, and also of allowing a certain party wakakaka to hijack its Bersih 3.0 rally which then saw civil disruption. The article said:

On both previous rallies — though it was organized by Bersih — on the actual day, it was hijacked by the political parties.

On Bersih 3, all hell broke loose when clowns from PKR got hold of the mic and started the fiery speeches which were very provocative.

The cops were no angels too. During Bersih 3, the moment this particular political figure started his provocative speech, me and my friends got up and left the scene for some chilled drinks. By the time we finished the first drink the whole area turned into a war zone.

We don’t need to be reminded of police brutality during Bersih 3. I surely don’t want to see innocent young ones beaten up for taking part on a democratic process. I don’t think this time around is going to be different. The Home Minister is also the DPM since yesterday and the Kebab still going mad for all the wrong reasons.

Yes, it was the story of Tonto sending up naughty smoke signals, wakakaka. On 02 May 2012 Dina Zaman wrote in The (now non-existent) Malaysian Insider’s The Bersih that wasn’t as follows:

With a video circulating showing that Anwar Ibrahim and Azmin Ali had ordered the Dataran breach, this does not bode well for Pakatan and the rakyat. This is a massive public relations disaster. The average Malaysian like me can only tear her hair out.

And now we are told that the duo were signalling to the police. What is this — Tonto and the Lone Ranger

While we can understand (though NOT support) the naughty antics of Anwar and Azmin for their vile exploitations/hijacking of Bersih 3.0, we cannot understand why Maria Chin Abdullah has turned Bersih into a very partisan anti establishment NGO, when Bersih is not that originally. I would have liked to play Sigmund Freud to her personality and psyche.

She has effectively destroyed the non-aligned credibility of Bersih 2.0 and in turn dealt a severe near-fatal blow to any prospects for electoral reforms in Malaysia.