Okay today I have a wee extra time so I'll blog a slightly longer post, but alas, not my usual t'ng k'ooi (ch'eong hei) tome wakakaka. 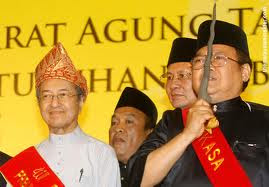 I am quite taken by RPK's post When a bunch of losers talk in which he blasted "... The Malaysian Insider editorial ... for blaming everything wrong with the country on Dr Mahathir ‘and his ilk’."

RPK went on to regale us with an account of Malaysian political history and how most Malaysians had abetted the entrenchment of UMNO as the ruling party.

Note my underlining in above sentence, where the verb 'abet' means 'to encourage, support, or countenance by aid or approval, usually in wrongdoing', as in (examples) 'to abet a swindler (wakakaka) or to abet a crime (wakakaka again)'.

RPK lambasted those (I think not just TMI's editorial) who attributed all Malaysia's woes to Dr Mahathir with his excoriating words as follows:

For seven general elections you sucked Dr Mahathir’s dick and licked Umno’s arse. Today, you write an editorial lambasting Dr Mahathir. I think you are 35 years too late. Why repeat what we have been trying to tell you over the last 35 years?

No, whatever is happening in Malaysia is NOT Dr Mahathir’s fault. It is your fault. So live with it and stop bitching, moaning and complaining. You made your bed so now lie in it.

And you know what? Barisan Nasional is still going to win the next general election in 2018. And remember that I said that. Losers!

For seven general elections you sucked Dr Mahathir’s dick and licked Umno’s arse - WOW! and you know what - RPK has been right.

Now, this is not to say Dr Mahathir has not been the principal person considered as responsible, through his overt and covert policies and decisions, for bringing our nation and its terrible state of affairs to this lamentable point in our history.

But we (especially our parents and their peers) have been guilty of abetting Dr Mahathir and UMNO in charting a short sighted course for our national ship towards a warning lighthouse instead of away from the rocks of disaster.

I would not dare dream of speaking for anyone but as a Chinese Malaysian, I know most (though not all) of my ethnic community were more interested in their economic well-being than in politics a la the overseas Chinese doctrine of '3 bowls of rice'. In this, they were attracted to Mahathir and his government for their promise of economic stability (regardless of whether this was substantial or of a fleeting superficial level, for in politics, perception rules). 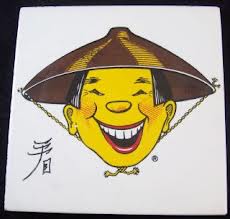 But then, what happened next was when a strong political leader like Mahathir left the seat of power (well, at least temporarily, wakakaka), his less charismatic successor AAB and even Najib have had trouble keeping an avaricious mob called UMNO from going feral in their unbridled lust for plunder. It sure as hell didn't help AAB when Mahathir kept undermining him.

Those modern brigands have a standard kit for quick ascendancy up the UMNO hierarchy of power (the higher one is up the hierarchy, the greater would be the 'rewards'), one of a show of extreme bigotry to establish their ethnic credentials as defender of the Malay race.

Match or mismatch the above post-Mahathir phenomenon in UMNO with a newer generation of Malaysians endowed with rich sources of independent and thus more reliable information, and ironically a stronger sense of citizenship, suddenly a new Konfrontasi emerges with a red line drawn in the sand.

Also, in response of the politicized posturing of bigotry by the brigands, the racially-inclined aggravations assume a higher public and publicized dimension, which in turn sucks in more non-compromising racist challenges and counter-challenges.

Even Mahathir himself saw fit to join in the racial stoush as he realizes that a new political dimension has settled in since his days of power as the undisputed 'King' when his words alone were enough to quieten the unruly mob.

I wonder whether it would have made any difference if strongman Mahathir was succeeded as planned by another (former) UMNO strongman Anwar Ibrahim? Wakakaka.