The word 'sate' in my post title is not an Indonesian spelling for 'satay' but an English word, pronounced as 'seyt'. It means 'to fill to excess; surfeit; glut'. 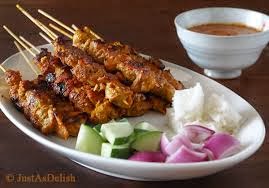 Perhaps a better equivalent word would be 'satiate' which means 'to supply with anything to excess, so as to disgust or weary', wakakaka, and I'm sure by now you get my 'sate' stick vis-a-vis Kajang.

In my previous post The Chaos that is PKR I wrote that Lee Chin Cheh of PKR has by his totally indefensible and unwarranted resignation from being ADUN for the Kajang state constituency (N25) betrayed kau kau the Kajang voters' trust, confidence in and expectation of him.

Bloke was elected by Kajang-ites to be their state representative, their 'voice' in the Selangor DUN (state parliament), just a mere 8 months ago. Now he has abandoned them.

And just for what did he resign and mess up the political peace and tranquility of Kajang?

For the personal interests of some PKR warlords!

Yes, I view Lee's politically drastic move, a gross betrayal of Kajang-ites, had been just for the personal ambitions and gratifications of PKR warlords! His party! A party affair! F**k the rakyat!

Look mateys, everyone knows that Lee's resignation has been related to PKR's intra-party political-fratricidal internecine feud between Khalid Ibrahim and Azmin Ali.

The bull about Lee's resignation from and Anwar Ibrahim's contesting of the Kajang state seat that comes out from PKR mouths have been of brain-baffling balderdash poppycock, indeed of Gargantuan proportions, ..... 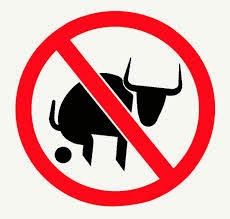 ..... telling and expecting us, like country bumpkins who naively believe in our leaders, to swallow the bull dust that PKR, by resigning from the Kajang state seat and then re-contesting that same seat, will (perhaps by the combined power of Odin, Zeus and Osiris) strengthen or save Pakatan in Selangor (both versions exist), prepare Pakatan for Putrajaya, promote international investment (WTF then has Anwar been doing as Selangor's economic advisor?), prepare Pakatan from Armageddon when Mahathir ousts Najib, resurrect the Dodo bird, Formosan clouded leopard and Tasmanian tiger, and allow us to contact the ghosts of Nelson Mandela, Princess Diana and Mat Kilau for 4-Ekor (the last will definitely be a fave with Chinese voters in Kajang, wakakaka).

And I've to say I'm disappointed with and ashamed of Rafizi Ramli, a man with the talent and potential to be PM one day, for being part of this PKR selfish self-interest self-gratifying circus.

The thing is and let's not pretend we don't know it, we were spared all these PKR bullsh*t until, yes, UNTIL someone was knocked out of PKNS, and this is a time-mark fact!

But even then, that was only a much latter event to earlier attempts to fill Khalid shoes which were far too big for the Døkkálfar Dwarf.

There has been even a tale (visit Malaysia-Today and read this) about someone 'martyring' himself (of a contrived kind of course, wakakaka) so as to bring the feud to a ferocious boil and exert pressure on Khalid Ibrahim.

The Kajang manouevre is just but another step in this pressure on Khalid Ibrahim.

Even Lim GE and Hadi Awang were left out in the cold, indicating it has been/is solely a PKR game, an intra-party power struggle, where for someone to achieve his wet dreams, a lot of people including Pakatan allies and especially the Kajang voters have been, are and will be f**ked around kau kau.

After reading RPK's THE IMPENDING SELANGOR CONSTITUTIONAL CRISIS and of the sleaze it tells us, it sh*ts me that DAP Selangor is still supportive of the machinations of PKR's inner coterie. What's f**king wrong with you Tony Pua?

But in contrast to DAP, I am glad that PAS has drawn a line in the sand with respect to Anwar's antics.

To be frank I don't believe Anwar Ibrahim really wants to be MB of Selangor. As I mentioned in my previous post The Chaos that is PKR that:

Anwar Ibrahim is a big-time politician who yearns for, seeks out and can only thrive in big-picture politics at either the national (federal) or international level.

To use an analogy, this man is a big shark of the high seas and not an ikan keli swimming in a longkang. You can't put him in a padi irrigation canal or a home-type fish tank and then expect him to flourish.

If I believe Anwar doesn't want to be MB of Selangor, then WTF is it all about?

Now, notwithstanding his declaration that he won't go for the MB post (or PAS will be mighty pissed off before the by-election, and we can't have that, can we?) there are 3 possibilities following his Kajang move and hope-for victory in the by-election:

(i) Ousts Khalid Ibrahim by Taichi* or Shaolin, becomes MB and promotes Azmin Ali to deputy MB, with the latter effectively the de facto MB running Selangor, all but in name (of MB), while Mr Manmanlai swims away to the high seas of national-level and international politics.

(ii) As an ADUN or even exco member but PKR de facto leader, breathes down heavily on MB Khalid Ibrahim's neck, somehow promotes Azmin to be deputy MB with same subsequent happenings as above, and possibly with Khalid Ibrahim as the Malaysian version of the Japanese enthroned Emperor of Manchukuo.

(iii) Oust Khalid and install Azmin as MP, and to f**ks with PAS and you-know-who!!!

To summarize, all these brouhaha and gross insult to Kajang-ites by PKR have been to serve one PKR leader, and he is NOT Anwar Ibrahim! Even the Great One must serve him!

And that is why someone has been smiling like The Cheshire Cat!

I predict that PAS will break away from Pakatan if Khalid Ibrahim is forced out from his state appointment and the PAS' candidate Iskandar Abdul Samad doesn't get to replace him as MB. This is the line I mentioned that PAS has drawn in the sand for Anwar to see .....

..... and we have arrive at such a stage because of the personal interests of one bloke (not Anwar).

There's an English proverbial rhyme about 'For Want of a Nail' that may in a certain way suit this stupid sorry saga with the potential to disintegrate Pakatan, if amended to read 'For want of commonsense'.

But given that it may possibly affect PKR internally and Pakatan generally, perhaps it may be timely to instead quote extracts from the Poetic Edda referring to Ragnarok, the Armageddon of Norse mythology, which informs us of the parlous state of humanity, especially among family members, in the aftermath of the gods' (or PKR warlords') final battle:

and kill each other,
sisters' children
will defile kinship.
It is harsh in the world,
whoredom rife
—an axe age, a sword age
—shields are riven
—a wind age, a wolf age—
before the world goes headlong.
No man will have
mercy on another. 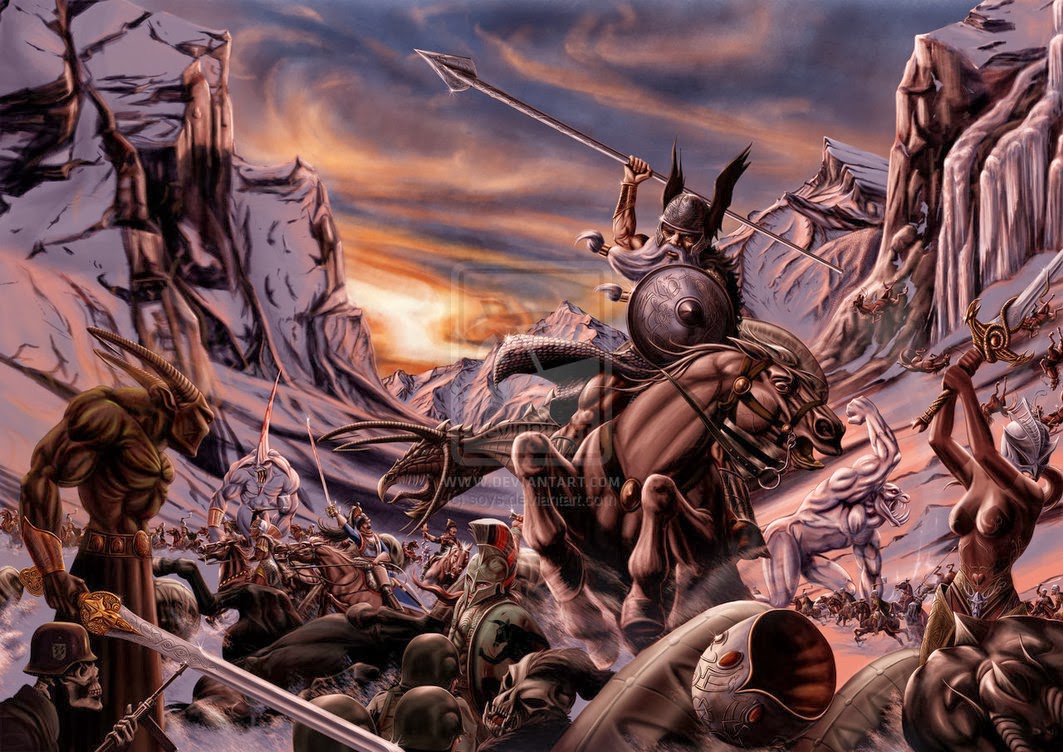 ..... and won't that just make UMNO happy because the lamentable thing about the current poisonous state of affairs in Parti Kaos Raka (PKR) is that it may infect Pakatan Rakyat.