Musa has posted a photo on Facebook as proof that he has the numbers needed to form a state government.
He again insists that the governor had a constitutional duty to consider his bid to form the state government."But if it's true the state assembly has been dissolved, I honestly say that we will fight in the coming election to give the people of Sabah a new government that is stable and fights for the interest of all Sabahans," he says 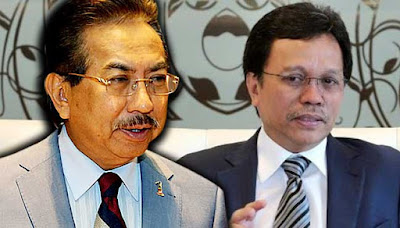 Too late mate. Shafie Apdal did what could only be done in Sabah - blocking access to the Yang DiPertuan Negeri to deny Musa Aman any opportunity to show he has the confidence of the majority of the Sabah State Assembly, and dissolving the DUN thus evoking a snap election - yes, t'was another 'backdoor' manoeuvre, wakakaka.
Maybe it's for the best as a one-seat majority would be pretty unstable for a Musa government. Here's the opportunity for Musa to re-demonstrate Shafie Apdal could only form a Warisan state government in May 2018 via the notorious backdoor with BN frogs by winning the state elections again.
Posted by KTemoc at 10:43 pm