Australia’s National TV-radio broadcaster, the ABC or more affectionately known to the public as ‘Auntie’, has a history of independent or if you like, anti-government reporting, even far more acute than the British BBC.

For years, government ministers and even PMs quaked when ABC interviewers or journalists hounded them for the truth. It was no exception for current PM John Howard, but of late, with several election victories under his belt, Howard has been perceived as becoming overconfident, arrogant and intolerant.

Additionally, over the years in power, he and his Liberal Party right-wingers have been slowly putting their own people on the ABC board, in an attempt to tame the ABC ‘beast’.

One of the most popular, in fact, the most popular show on ABC with top ratings over the last 5 years has been the comedy show, The Glass House.
I am not sure of the origin of the show’s title but it could well be borrowed from the saying “Those who live in glass houses shouldn’t throw stones”, a saying that would apply most suitably to Khairy Jamaluddin who had the thick skin to advise think-tank Asian Strategy and Leadership Institute (Asli) to be more careful when publishing future reports that touch on issues of race and other sensitive matters.

I blogged on this in Mouse Rempit told Asli not to be racist!

Anyway, back to The Glass House. The last episode of The Glass House will go to air on November 29. The ABC yesterday axed the weekly panel show hosted by the comedian Wil Anderson. The show has been frequently accused of anti-Government bias. 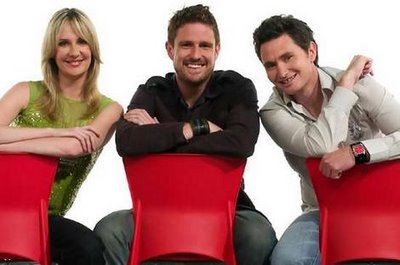 Notwithstanding its anti-government bias, which the ABC has a proud record of, isn’t it just strange that the national broadcaster would axe its top rating comedy show?

Now, many Aussies are questioning the illogic of its axing, and accusing PM John Howard of being behind the move. The three hosts, Anderson, Hughes and Grant regularly make jokes about Mr Howard and the US President, George Bush, provoking critics to accuse them of left-wing bias.

Quite frankly those three would have made jokes about anyone, and indeed they have.

PM John Howard has unusually emerged to say he didn't pressure the ABC to shelve comedy show The Glass House. But let’s face it, when one is a PM, one doesn’t have to say directly “I want that show axed!”

Howard is already notorious for claiming on a number of occasions that he didn’t know or wasn't aware of a lot of dodgy affairs (Tampa, Children Overboard, etc) that had occurred under government conduct or watch. The ones who fell on their swords were always his ministers and staff but never him. Most of those who left after the dodgy businesses were exposed would somehow ended up with a plumb cushy posting like his favourite minister, Peter Reith, once said to be Howard’s preferred successor.

But if it's about economics, why then axe the top rating show, which in fact doesn't require much props or travelling - it's just three comedians yakking away in front of a studio audience, castrating the PM, President Bush and various other (local and foreign) dignitaries every week.

One of the comedian-hosts, Corrine Grant, said she came to know of the decision five weeks ago, but she wasn't told why. She told the Sydney Morning Herald: "We've known for a while. They have said we've had five great years and that's it. They haven't given us or anyone else a very good reason."

Related:
Aussie politicians = UMNO politicians
Posted by KTemoc at 4:05 am