Questions for Wan Azizah on UMNO's 'unity government' with Pakatan She said discussions, if any, would need to wait until PH chairman Tun Dr Mahathir Mohamad returns from the US, where he is currently attending the United Nations General Assembly.

“We haven't set up a meeting yet. (We'll) wait for Tun Mahathir to return and discuss whether or not the cooperation should happen,” she told reporters after launching of “Better Brighter Anjung Kasih Yayasan Kebajikan Negara (YKN) @ Serdang Hospital” today.

Umno president Datuk Seri Ahmad Zahid Hamidi has repeatedly broached the topic of a unity government with PH parties, but the efforts appear to be unilateral so far.

When asked about if government will recognise the Shadow Cabinet unveiled by Barisan Nasional this week, the deputy prime minister said she was reviewing the matter.

YB DPM, though the news is a week old, what exactly did you mean by 'unity government' with UMNO? 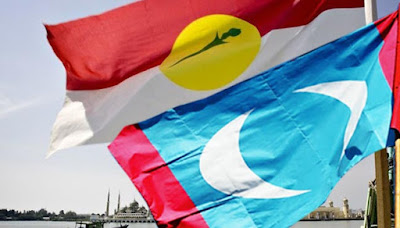 Three points I need to make:

(1) When Mahathir was out of country, you became the acting PM and could have made a decision on such an UMNO proposal,

(2) For you as acting PM not to reject the UMNO proposal straightaway had been to accept it in principle or to consider it as a (future) possible option, and

(3) PH is currently ruling with a solid majority in federal parliament, so why would you even contemplate such an UMNO proposal of 'unity government' which means allowing a defeated UMNO to return to power in government?

You have a few questions to answer YB DPM. Start on the above instead of wasting taxpayers' money to just focus on your husband's by-election campaign.

PETALING JAYA: Four months after Barisan Nasional’s disastrous defeat in the May 9 polls, Umno vice-president Mohamed Khaled Nordin is now hinting to a possibility of a new coalition.

He is touting the formation of Pakatan Malaysia, which would comprise PAS, MCA, MIC, Gabungan Parti Sarawak (GPS), Gabungan Bersatu Sabah and PKR.

He said with the right formula, they could form a political coalition that could give Pakatan Harapan a run for its money.

In a letter to PPBM president Muhyiddin Yassin today, he was quoted in the New Straits Times as saying: “At the moment, Malaysia is patterned by one political coalition against myriad political parties.

“Each one has its own strengths and each one has to be strategic and open to survive.

“It is not impossible for a new coalition, with PAS, MCA, MIC, Gabungan Parti Sarawak (GPS), Gabungan Bersatu Sabah and PKR, to form Pakatan Malaysia, instead of Pakatan Harapan.”

Khaled said Umno was still a formidable party and had learned from its mistakes, adding that Umno is still more dominant than PPBM.

“We will continue to resurrect Umno as it is a movement to strengthen the Malays. It is a Malay institution and to Johoreans like myself, it is part of our lives,” ...
While I can't blame UMNO or PAS for proposing the concept of Malay unity, especially when both parties are in the 'outer' and desperate to get back into power, you as DPM and a top PKR leader should be ashamed of not rejecting UMNO's lustful but sinister approach straightaway.

How can Pakatan supporters trust you?