KUALA LUMPUR, Oct 16 — The High Court here quashed the unilateral conversion to Islam of two young children born to a woman who later embraced Islam and her Buddhist ex-husband.


In her decision, High Court judge Datuk Azizah Nawawi said she is bound by the Federal Court’s landmark ruling in the M. Indira Gandhi case.

Noting that it was not in dispute that the children in this case were converted without the consent of both parents, the judge said: “Therefore the court is bound by the decision in Indira Gandhi case”.

Naturally such problems involved Indian and Chinese couples, where one erstwhile partner converted to Islam whilst the other remained as a Hindu or Buddhist, Christian, Taoist, atheist, etc.

And in the general case, have you noted that for Indian couples, it would usually be the husband who converted to Islam, whereas for Chinese couples, the wife would be the one converted to become a Muslim.

Why have there been such a pattern? Could that be because Indian wives have been the more conservative partner, faithfully steadfast to her religion and extended family, whilst the Chinese wives were more assertive-aggressive and perhaps even religiously adventurous or more enlightened?

What I am going to say next does not apply to every instance of conversion but I have come to notice, or rather suspect a general denominator I don't particularly like. You may say that perhaps I am a suspicious guy, but I reckon in many cases (not that there have been many by nature of my suspicions) the conversions were not sincerely religious-motivated (or Islamic-motivated).

Mind, there had been one exception, the case of Susie Teoh. Dear Susie eloped to Kelantan with her Che'gu who married her at the age of 15. She of course converted to Islam.

Her aggrieved and saddened father Teoh Eng Huat sued the Kathi of Pasir Mas Kelantan and Majlis Ugama Islam for converting her daughter, a mere minor, without her father’s permission. But the High Court in KB unbelievably held that the conversion was valid, as the girl (despite being a minor) had the right to choose her own religion, provided that she did it according to her own free will.

The court then cited section 75 of Kelantan Council of Religion and Malay Custom Enactment 1966 to show the Kathi, if he was satisfied a person was a major according to Hukum Syarak, could register the person as a convert.

This ruling failed to recognise that the girl in question was (1) a minor who would be too immature to make sound decisions, and (2) a Chinese, so how could, for example, the Malay Custom Enactment apply to her. As a non-Muslim, how could Kelantan Council of Religion and the Hukum Syarak also apply to Susie Teoh, a Chinese minor?

It was inevitable the KB High Court's decision was subsequently reversed by the Supreme Court. But sadly for Mr Teoh, the Supreme Court declined to make the declaration as the issue became a moot point since Susie Teoh by then was no longer a minor.

Thus the crime of kidnapping of a non-Muslim minor and her conversion to Islam were conveniently erased by the passage of time.

I raised the above case only to show that it did not fall under what I am about to say, to wit, the cynical issue of questionable conversion to Islam.

At this stage I thought I might remind my readers that the issue of unilateral conversion by ONLY one of the parents became a problem only because the likely mistake (or ...) of the translator (or drafter) of the relevant law into the Malay language.

In the original English language, Section 107 of blah blah blah states 'parents' which means both dad AND mum (must agree to the conversion), but in the translation of that law into Malay, the translator wrote 'bapak ATAU ibu'. I am sure you understand what that implies and its significance to unilateral conversion by one of the parents.

Anyway, I am not going to revisit that law and its consequences because that is not the topic I am writing on and posting here.

My issue has to do with my suspicions, that what I observe and suspect is that one of the non-Malay-Muslims partners of an unhappy marriage who wanted sole custody of their children, might have 'used' Islam as his or her escape clause to win. Such has been the sensitivity and ketuanan-ness of the religion of Islam and Malay custom that it was a sure-victory for the Muslim convertee, well, UNTIL recently in the recent landmark decision by the Federal Court ruling in M. Indira Gandhi’s case.

I recall a case in Penang some years ago but definitely NOT before 2008, where the ex-wife just walked into her former husband life one day and took away the child who was looked after for years by the father since their breakup. Then-CM Lim Guan Eng was struck into silence because it involved a Muslim - that woman had converted to Islam prior to her seizure of a confused child. 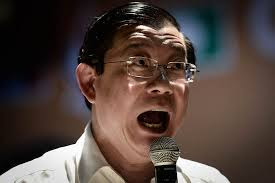 I don't blame Guan Eng for his helplessness even though the unfortunate father was (is?) a non-Muslim Chinese and probably a supporter of the DAP. Until the recent Federal Court ruling in M. Indira Gandhi’s case, there was NO way a non-Muslim parent had an microscopic chance to win custody of the child(ren), such was the best-forgotten cowardly abdication of civil courts to syariah courts.

Another variation to this 'convenient conversion' kowtim-risation for the suspected unscrupulous ex-partner involved, and I suspect will involve, inheritance.

Picture a scenario: A bloke, say Hindu, died and immediately on his decease, his (Muslim) brother claimed the dead brother had secretly converted to being a Muslim. No one knew that except the Muslim brother who of course would be strongly supported by the overeager ulamaks. The Hindu wife could only grieved in helplessness as the remains of her late husband (a Hindu-surprisingly-discovered-to-be-a-Muslim on his death) was taken away for Muslim burial.

But who would have gotten his property according to Malay-Islamic inheritance laws?

It's not for me to advise Muslims to be more discerning on accepting convertees, especially if a convertee has or is about to suffer a broken marriage, but has children.

The sad truth is that not every convertee would necessary be a sincere asset to Islam.