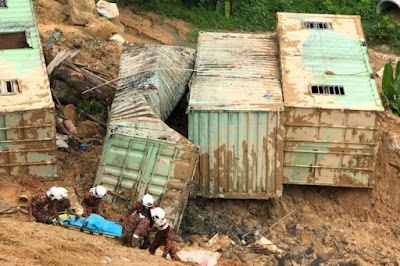 GEORGE TOWN: Three people were killed while 12 were missing after a landslide occurred in Bukit Kukus in Paya Terubong here on Friday (Oct 19).

Four containers used to house workers at the construction site were covered in the landslide and 10 workers were reportedly buried under the earth.

According to state exco member Phee Boon Poh, three people were killed in the incident.

The search and rescue operation by Fire and Rescue Department is still ongoing while survivors have been sent to hospital.

Photos being shared on social media show parts of the disaster where mangled cargo containers, possibly used as site offices, store rooms or workers’ quarters, are seen lying on their sides.

The landslide took place at the construction zone of the paired road from Bandar Baru Ayer Itam to Bukit Jambul, which has been beset with problems.

Last Thursday (Oct 11), 14 concrete beams, 25m-long each, crashed down from an elevated section of the highway. No injuries were reported.

Very sad. It's not far from where my old house was. As a kid I used to play around that district. I hope the missing 12 can and will be located soonest. My thoughts are with them and their families.