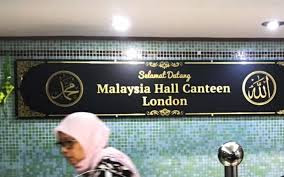 To eat nasi lemak, or kuih, in Malaysia Hall in London, one has to present one's passport.


Last October, visitors coming to eat at the Malaysia Hall Canteen (known as the Canteen), were made to show their passport or IC.

For those who are unaware, the Canteen in Queensborough Terrace, in the Bayswater area of London, is considered by many Malaysians to be a "home, away from home". It is located in the basement of the Malaysian Students Department (MSD), and is a place where one can satisfy one's cravings for authentic Malaysian food, at affordable prices.

The Canteen is not The Ritz, but Malaysian students who are homesick, and on a tight budget, eat there. So do Malaysian residents who work and live in England. They also bring their non-Malaysian friends, and hordes of Malaysian tourists, visit the Canteen to experience true Malaysian hospitality and comforting Malaysian food.

One could have nasi lemak or roti canai for breakfast, nasi campurfor lunch and a selection of kuih for dessert, and still not break the bank. One could make oneself at home, and eat with one's fingers. Water and rose syrup are free. 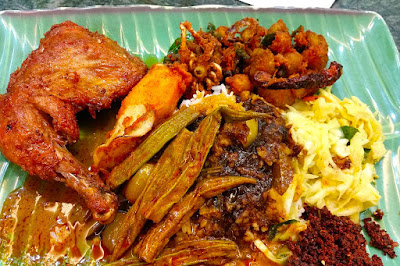 The Canteen is also a hit with Singaporeans and Bruneians, and the surau is popular with Muslims, who join the Malaysian congregation for Friday prayers, then stay for lunch.

The easy-going atmosphere ended last October. The first Malaysians knew of the ruling was when a few of them who went to eat at the Canteen were turned away. They vented their fury on social media. The trickle grew into a torrent.

In the past, one could go through the metal grille, at the front of the building, down one flight of stairs and into the Canteen, in the basement.

Since the new directive, Malaysians who merely want to eat, have to use the main entrance, several metres away, and then make their way along a rabbit warren of staircases and narrow corridors, down to the basement Canteen. One could easily get lost.

Does one require a passport or the MyKad to go for a makan? Perhaps, one ought to ask for the real reason behind this directive. There are a few hypotheses.

Following a public outcry on social media, Foreign Minister Saifuddin Abdullah (photo) told the media that security had to be tightened after frequent incidents of the theft of passports. 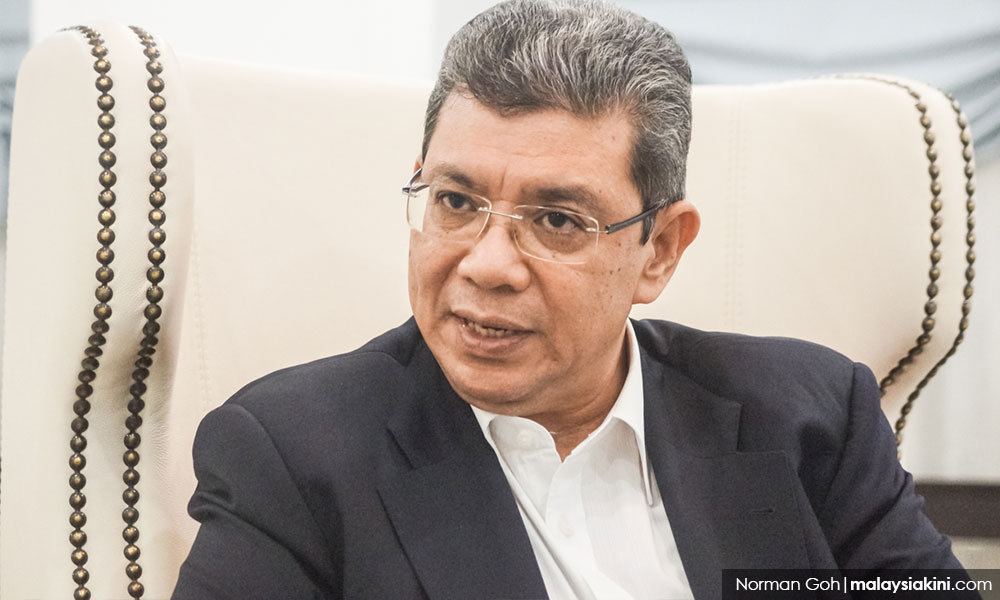 The revelation took many by surprise. Nobody, including the regular patrons of the Canteen, was aware that there had been any theft of passports at Malaysia Hall.

The restaurant operator, when contacted was also in the dark. She said, "I, of all people should know about these passport thefts, as it affects my business premises, my business and my reputation.

"If there are thefts, I want to keep my eyes open, and demand an upgrade in security. Our Canteen is open from early morning to late at night. I, or a member of my staff, would have known about any theft. We heard nothing. Malaysians will not keep things like this secret, and would warn others to be vigilant.

"I asked the former head of immigration in the Malaysian High Commission in London, before he was posted back to Malaysia. He said that most Malaysians had their passports stolen in the tourist spots of Oxford Street, Bayswater and Harrods. He dismissed reports of passports being stolen at Malaysia Hall."

So, did the Malaysian High Commission staff feed the foreign minister misleading information? The remark, by the former head of Immigration, is telling. Did the CCTVs in Malaysia Hall and the Canteen show the supposed passport thefts?

What is the real reason behind the security ruling?

If security is of the utmost concern to the High Commission of Malaysia in London, why is the passport ruling waived for Friday prayers?

On Fridays, the main entrance and the metal grille to the Canteen are unlocked from 12 noon till 2pm.

During this period, any foreign Tom, Dick or Harry can enter the premises, via the metal grille to the Canteen, or use the main entrance, and make their way towards the basement prayer room, which is adjacent to the Canteen.

They need not be accompanied by a Malaysian. They need not show any proof of identification, but afterwards, the foreigners must leave the premises and not stay to eat.

The Canteen operator is warned not to serve any foreigner.

Conversely, if she were to probe and demand to see the customer's passport, she would be called a racist and her business would suffer. More importantly, she has no authority to scrutinise anyone's passport. That onus should fall on the Diplomatic Staff. But on what grounds? Just for the person to eat?

For decades, Malaysians and their foreign friends have enjoyed Malaysian hospitality and food at Malaysia Hall (first at Bryanston Square and now at Queensborough Terrace). This new directive puts Malaysia in a bad light.

So, do pickpockets not work on Fridays?

The foreign minister said that non-Malaysians could enter the Canteen provided they were accompanied by a Malaysian who showed his passport.

The receptionists at Malaysia Hall, are asked to act as ‘security guards’, to screen customers to the Canteen. They are not trained for this role.

The discretion used is far from satisfactory. Many visitors have complained about the arrogance of the Little Napoleons at the entrance.

One Malaysian wife, with her English husband, had come to eat at the Canteen. She was rudely asked, "Who is he? What is his relationship to you?"

For decades, the Bruneians have frequented the Canteen. Last December, some who had gone to eat at The Canteen were barred from entry and rudely told about the thefts which precipitated the change in policy. The Pengiran from Brunei said, "...but what would we want to steal...?" 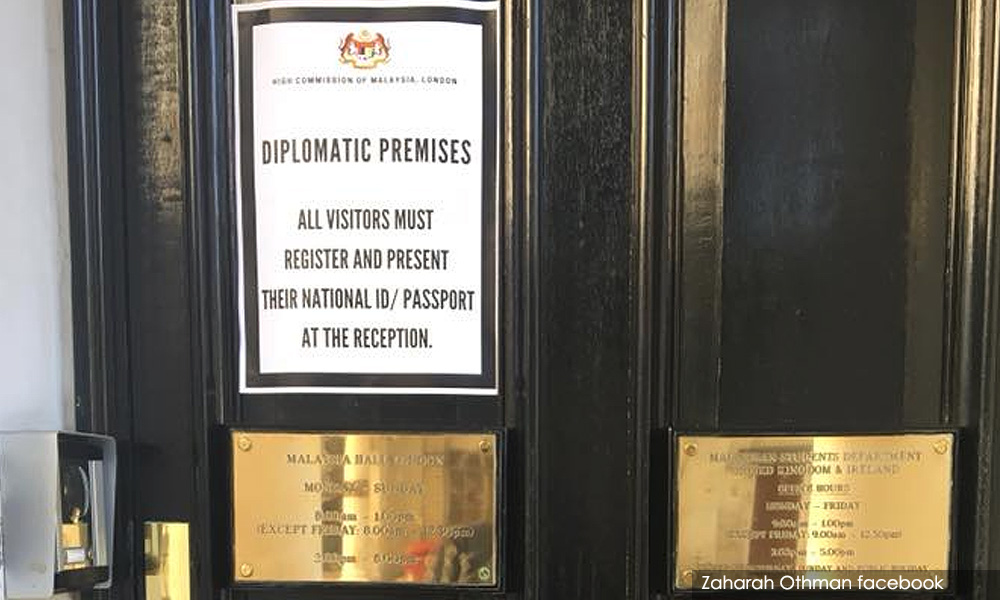 Two Malaysian students came to eat; one had his passport with him, the other did not. Furious at being rejected, the one who did not have his passport, took the train and bus ride to his digs, a 90-minute round trip, and returned to show his passport to the officious Malaysia Hall receptionist. He did this as a matter of principle.

A Malaysian from Taiping was touring England during Christmas, with his Singaporean wife and daughter. The girls were banned from The Canteen, even though the Malaysian husband showed his passport.

If the Malaysian High Commission and Education Ministry want their receptionists to act as guard dogs, they could at least be tutored in civil mindedness, courtesy and the use of discretion.

What constitutes diplomatic territory? Malaysia Hall (MH), which is under the auspices of the Ministry of Education, provides temporary lodgings for mostly government-sponsored students. It is also a convenient venue for talks by ministers.

It is undisputed that the Malaysian High Commission in Belgrave Square is considered, under the Vienna Convention, to be Malaysian soil.

So, is the Canteen of the Malaysian Education Department, which is two-and-a-half miles away, also on sovereign soil? Was this fact hidden for 61 years? Is MSD/MH really on diplomatic territory? Or is this a convenient misrepresentation?

If it is claimed that MH (and the Canteen) is on diplomatic territory, why is it not guarded by armed policemen from the London's Metropolitan Police's Parliamentary and Diplomatic Protection (DaDP) squad?

The Canteen operator claimed that she was only given 48 hours notice before the new ruling took effect.

She was not informed about passport controls.

She was only told that the metal grille to the basement, where the Canteen is located, would be locked. Patrons to the Canteen needed to use the main entrance.

The Canteen operator pays rental and amenities (water, electricity, gas) and agreed that it was MH's prerogative to decide on the entrance as they owned the building.

However, had she known about the passport ruling, she would have objected, because her business would be affected.

Staff of the High Commission and the Education Ministry hold the key which opens the side door to the Canteen at Malaysia Hall. This door leads to the short staircase to the road.

By locking the door and holding onto the key, the Education Ministry staff are breaking fire safety rules. Customers will not be able to flee from any fire which breaks out, via the side door to the road. They will have to negotiate the series of narrow passageways to Malaysia Hall's main entrance.

Many disappointed Malaysians, who work, study and live in London, are furious. One said, "Is the passport ruling a red herring for someone's hidden agenda?"

Another asked, "Is this passport ruling a smokescreen for something serious which happened at the High Commission? Allegedly, some officials based in Malaysia, do not know that the Canteen and the High Commission are two-and-a-half miles apart."

One person said, "Is someone hounding the Canteen operator out of business, with a view of taking over?"


Very interesting question on whether someone hounding the Canteen operator out of business, with a view of taking over?

More so now that there is a new Malaysian government.

The 2 idioms in title of article, 'red herring' and 'sour grapes', are also interesting.