Indonesia is the world's largest archipelago consisting of 17,508 islands and has enacted laws to govern the seas in accordance with the geographic structure of its archipelagic state. 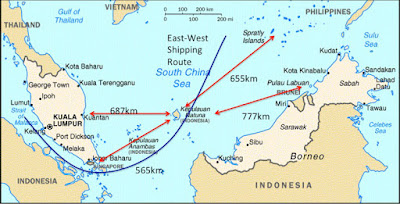 It states that all the waters surrounding and between the islands in the territory came within Indonesia's sovereignty. It also determined that the country's outer limits of its territorial water was 12 miles.

Now this is the interesting part for Malaysia. Indon measures its outer 12 nm territorial limits from a straight baseline drawn from the outermost points of the islands, sometimes loosely or informally referred to as Indonesia's archipelago territorial concept. Naturally the airspace within and above these areas are to be considered as Indonesian airspace.

On the surface this would, it seems, effectively divide the geographical integrity and sovereignty of Malaysia because the Natuna Islands are smack right in the middle of the South China Sea which lies between Peninsula and Sabah-Sarawak Malaysia.

However, as I was told years ago, Malaysia has only agreed to recognize Indonesia's archipelago territorial concept on the strict condition that its territorial concept does NOT interfere with nor separate Malaysia's sovereign rights to communicate freely between its Peninsula and SAbah-Sarawak states.

So why then have we now come to hear about the nonsense of RMAF aircraft [being] intercepted by Indonesian jet fighters (as reported by the Star Online)?

A RMAF C-130 transport aeroplane was intercepted by Indon Air Force fighter jets over the main Natuna Island. This has to be considered as unwarranted interference in our air force flight during peacetime conditions. 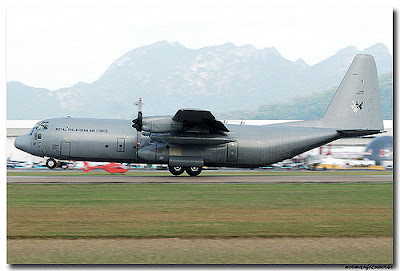 And even leaving aside for a moment the Indon's disregard of the Malaysian-Indon agreement on uninterfered unrestricted movement between the two wings of our nation, why would the Indon Air Force do so to a transport plane of a friendly neighbour state when such flights have been going on uninterfered for the last 50 years?

One - the Indon Air Force wants to practise its air interception on an unarmed slow lumbering C-130 transport plane.

KT opinion - most unlikely in my opinion.


Two - The Indon Air Force which hitherto has no fighter jets on Natuna Island and presumably has recently moved some to Natuna, wants to demonstrate to China it possesses teeth in the South China Sea.

KT opinion - The background to this, namely, intrusions into Indon territorial or fishing waters by a few Chinese fishing trawlers, seems to indicate an over-the-board reaction by Indon. Possibly Joko Widodo wants to perpetuate his tough guy image at home, as a followup to his shameful serial executions of criminals. Most likely.


As a concluding note, I suspect there could well be kowtim-ness between Indon and Malaysia on the air interception, as a warning to China.

But if that had been the case, I'm not sure whether Malaysia was wise to have accepted such a joint sandiwara by playing the victim role. It's f**king dangerous for our C-130 crew, considering how cap-3-kepala those Indon Air Force pilots are known to be.