Was it worth cordoning off Dataran Merdeka?

Really, with such a turnout, was Dataran Merdeka even necessary, other than serving as a convening point for participants (rather than rubbing off on the concept of ‘freedom’ it is supposed to symbolize)?

The point has again been made in no uncertain terms that Malaysians want, nay, demand ‘clean and fair elections’.

It’s an indictment on the absence of the so-called impartiality, independence and integrity in the Election Commission (EC) that I have to use those quotation marks to highlight Bersih’s raison d'être for its mammoth sit-in. The EC Chairperson and his deputy are UMNO members eh, ptui!

Our democratic dues have to become instead a quest through such Bersih campaigns. The two Dirty Rotten Scoundrels heading the EC must resign or be removed. 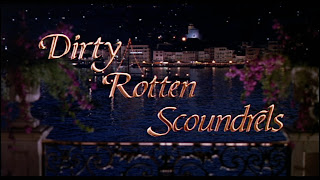 But alas, Bersih has had its peaceful sit-in blemished by the incident of police tear-gassing a section of the crowd. The men in blue claimed they had to when someone broke through the fenced up Square and was then joined by many.

Now, that a small group breaking through the police barrier has not been disputed. But what Bersih (in the person of Ambiga Sreenevasan) hasn’t been able to confirm yet has been the identity of that unruly mob, who in ignoring Ambiga’s instruction to end the sit-in and disperse, has brought about (or set up the excuse for) the violence.

Naturally Ambiga wants to lay her hands quickly on some facts. She’s very upset that the violence had taken place and spoilt the otherwise perfect profile of a peaceful sit-in. Ambiga demands that the full extent of the law apply to those responsible, regardless of who they are.

Inevitably the authority and PKR are pointing fingers at each other.

PKR, and I suppose Pakatan, claim that they were UMNO agents provocateur sent to incite violence to cast aspersions on the participants, in particular Anwar Ibrahim. I read of this in Bernama which asserted that Anwar gave the order for his people to break through and occupy Dataran Merdeka.


Anwar had in his speech at Masjid Negara told protesters to “proceed to Dataran, whatever happens”, but said it was Azmin’s speech that changed the mood.

“It is believed that the crowd became unruly after a speech by PKR deputy president Azmin Ali who asked the demonstrators ‘if you want to occupy Dataran Merdeka’."

“His question was met with cries of “hancur rempuh, buka pagar” (crash and destroy, open the gates)”

But given the mainstream media’s political allegiance and my lack of confidence in its impartiality I hesitate to accept its pitch wholesale yet though what has been written about Azmin Ali sounds typical of his proclivity.

I said I ‘hesitated’ because, while I am not confident of Bernama,or the Sunday Star or Mingguan Malaysia, it is not totally implausible for a scenario which sees a hot head, fired up by the momentous occasion and with adrenalin on speed, decided to burst through the police cordon in a solo bid for glory. And he could have supporters who too might have wanted to share that moment of exuberant glory. When there were 300,000 participants who could really claim all were in peaceful control of themselves?

Muhyiddin naturally put the blame on Bersih but then he’s so low brow we can just ignore that political Neanderthal's usual mumbling.

Now, I did warn in my earlier post Bersih - "Uncle okay?", Auntie is okay! that:


But Anwar just had to make a speech, didn’t he? Couldn’t he remain quietly in the background and let Ambiga be the main person for the day? Why must he have to make a speech which invariably would overlay the civil movement with the sheen of political parties? Knowing manmanlai's craze for publicity and the spotlight, I had not been wrong to predict his inability to stay in the background.

And I read that there were cries of ‘Hancur Rosmah’. Typical! WTF has that got to do with Bersih?

As I had written:

In the synthesized declarations of Ambiga Sreenevasan and Maria Chin Abdullah: “Bersih is a coalition of 84 NGOs and not a political organization. Civil society will lead its rally and assembly.” The message to Malaysians must be unequivocally and unambiguously clear that Bersih 3.0 in demanding clean and fair elections is a campaign by very concerned and politically-neutral citizens who are neither pro Pakatan nor anti BN, or vice versa. Far more importantly, Bersih’s efforts are pro public interests and anti-corrupt elections. Bersih seeks to prevent nefarious forces from cheating the voters of their choice of representatives.

Alas, that was not to be.

The regrettable observations were the following:

(1) Marina Mahathir made the most striking observation which sent her ballistic – she was wont to write in her blog Rantings by MM:

I saw the photos of the police rolling out the barbed wire and I saw red. Since when did our police, or whoever is their boss, roll out barbed wire - barbed wire!! - against their own people?? Are we thugs? Terrorists? Thieves?

(2) Violence against the police which required some cooler heads in the rally to provide protection for a police driver who had hit several participants, and where even his police car was overturned. He subsequently informed Malaysiakini that he had passed out from losing a lot of blood after a "hard object hit his head on the left side" - see MKINI's Driver: I passed out before crash. 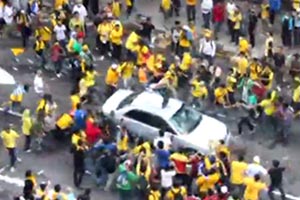 As much as I deplore police brutality, and indeed our police have a notorious reputation for such, I have to worry when members of the public attacked the police and police property. This smacked of anarchism or worse, armed revolt.

The last time I heard of police being attacked was from my uncle who revealed that some thirty years ago, a (Indian) police inspector in Alor Setar, known for his brutality and bullying ways, bashed up a Royal Malay Regiment soldier on one of his arrogant kick-ass forays. Wrong person to bash!

The victim marshalled his mates from the barracks and armed to the teeth surrounded the police station where the brute was. Several shots were fired in the air with the soldiers demanding the inspector step out to face the music (rat-tat-tat music?). My Uncle heard that the IGP and Army Chief had to swiftly intervene before Fort Apache with our MGR in it were blasted up to shreds.

In a much earlier incident (in the 70’s?) the IGP was assassinated in the heart of KL by a CT. And even earlier than that, my granduncle who served in the SB was assassinated, also by a CT.

But such violence against the police meant breaking the law, and this was precisely what DAP’s VP, Tunku Abdul Aziz, had been worried about when he refused to back Bersih. Should the authority’s (and Bernama's) allegations against Anwar Ibrahim for egging his people to break the police cordon of Dataran Merdeka prove to be correct, there’s going to be a lot of “I told you so” at DAP HQs.


However, the Sunday Star reported that:


DAP vice-chairperson Tunku Abdul Aziz Tunku Ibrahim, who opposed the Bersih 3.0 demonstration being held at Dataran, was “appalled” by the outcome.

“The temptation to say I told you so is compelling but I shall refrain from gloating over it.”

Now, regardless of whether UMNO had sent its agents provocateur or that a PKR supporter decided to do the exact opposite of what Steve McQueen did in The Great Escape, breaking in instead of out, Bersih has been a success, though marred by a situation which saw Malaysians being pitted violently against Malaysians – Malaysian civilians against Malaysian police and vice versa.

So, was it worth cordoning off Dataran Merdeka? Can you cordon off a cry for ‘clean and fair elections’ by a tsunami of 300,000 strength?
Posted by KTemoc at 8:04 pm