“We are fed up with the Health Ministry and the Higher Education Ministry which are silent on the matter despite obtaining solid evidence of the MMC practising race-based policies,” said Mohd Amin Mohd Ismail on behalf of the disgruntled students.


“Although I am a Malay, I feel it is not right for the MMC to discriminate against the non-Malays… they are my friends too,” he told FMT.


He said students were in possession of an e-mail sent by MMC secretary Dr Wan Maslan Mohamed Woojdy to the Crimea State Medical University (CSMU) administration on June 25, 2005 to obtain details of Malaysian students in the Ukrainian university.


“In his e-mail Wan Maslan asked the university to provide the race of all Malaysian students in the university. This is a bit weird. What good is this going to do. So what if students studying there are Chinese, Indian or Malay… they are all Malaysians,” he added.


CSMU is an established university which conducts medical degree courses for about RM120,000. It has been reported that nearly 1,000 Malaysian students of Indian origin graduated from the university since 1997 until it was dropped from the list of recognised universities by the MMC in June 2005. 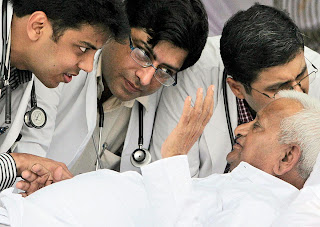 what the minister saw and didn't like
“I believe MMC insisted on the de-recognition of CSMU in 2005 after realising that there were many Indians studying in the university. We have sent our case to the Health Ministry but until today no action has been taken,” said Amin.


Also read my earlier post Only some may be doctors


Vote out the lying Health Minister, then reform the racist  MMC.
Posted by KTemoc at 5:48 pm