When Azmin Ali criticized MACC for raiding Lim Guan Eng's house in the anti-graft agency's search for evidence on allegations of naughty dealings by Guan Eng in the purchase of his Pinhorn Road house, it's not that Azmin has been wrong. In fact he has been spot on in saying MACC has continued to demonstrate imbalanced treatment of Pakatan pollies in contrast to BN pollies like Najib Razak and his various billions of this and that. 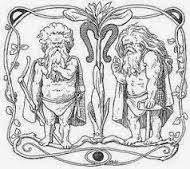 It's the timing lah. Yes, his timing has been less than brilliant, in fact far from that, wakakaka.

For a start, I've always viewed Azmin as not one to show sympathy for DAP pollies - I suspect he believes his status is way way above Guan Eng - an analogy would be like a Brahmin to a Sudra, wakakaka, and in this regard Guan Eng is lucky not to have been considered as an 'untouchable', wakakaka again.

Then, as I just mentioned, the very timing of his criticism of MACC with regards to its raid of Guan Eng's house is gnam gnam at a time when Azmin finds himself right in the midst of all sorts of self-induced strife.

He is a very unhappy bloke right now, finding himself currently not popular with his own party PKR, his so-called Pakatan allies (so-called in the way he has been treating them, both DAP and Amanah) and worse, his complete nightmare, a PAS whom he as a so-called Pakatan leader has been shamelessly wooing like a lovesick Casanova, becoming estranged from his embrace and turning rather hostile to him.

'Twas reported he had threatened Selangor's PAS exco members that he would require them to resign from the state exco positions if PAS doesn't give way in the Sungai Besar by-election to ... guess who? ... wakakaka ... yes sir ... PKR.

Then he denied that accusation, saying it was sheer nonsense but alas, those PAS blokes in in Selangor pulled the rug from beneath his feet by confirming he did say so. Alamak, how to believe him liao lah!?

This was naturally followed by PAS giving him the proverbial two lil' birdies.

Then the Anwar letter emerged, in what was an obvious chiding of Azmin.

My kind and generous disposition towards Tun M was not reciprocated. Far from being remorseful he displayed the contemptible aspect of his character by repeating the scurrilous attacks.

The humiliation, sadly did not elicit any response from my trusted colleagues.

The latter just said it's fair for PAS to demand to contest the Sungai Besar and Kuala Kangsar by-elections. Who cares what PAS wants. We put Amanah in the two by-elections as the rep of Pakatan Harapan for whom both UMNO and PAS are its enemies.

That leaves Azmin only with his Uncle who himself is becoming politically less credible day by day.

As TK Chua, a FMT reader, has written in an opinion piece titled No such thing as being a little pregnant in a reference to Azmin Ali's unholy dalliance with PAS, the political foe of Pakatan Harapan, Azmin's judgement is questioned as to where his loyalty lies, with his Pakatan ally Amanah or with Pakatan's foe, PAS?

We have pretenders, hypocrites and corruptors as our politicians and leaders. The baloney being perpetrated is beyond belief. No explanation, justification and rationale has been given for anything. Everything is based on power, defiance, personal survival, and obstinacy.

We violate agreements, ethics and principles and we allow the slippery slope of expediency and hypocrisy to lead us to more baloney as is evidenced today.

Seriously, how could we have PAS as a friend and ally on one hand and as an enemy and opponent on the other at the same time? I think only the greatest hypocrites and the most self-conceited could see no contradiction in this situation.

[The above is the the part about Azmin and PAS being a "little pregnant" in their questionable alliance].

How can Pakatan Harapan (PH) especially PKR treat its equal partner Amanah as a lesser friend whenever the situation suits them? We may occasionally ask our friends to sacrifice something for us, but asking them to sacrifice for their enemies is nonsensical. Asking Amanah to sacrifice for PAS is out of the question. If PKR was a true friend, it would never have even thought of asking this.

Indeed, it's just horribly obscene to ask Amanah of Pakatan Harapan to give way to PAS, the enemy of PH, but we're also aware that Mahathir wants to see PAS in a straight fight with BN, and what Mahathir wants, Azmin seems to be anxious to ensure Uncle gets what Uncle wants.

Yes, we must question Azmin's judgement and loyalty to Pakatan in asking Amanah to sacrifice for PAS in the Sungai Besar and Kuala Kangsar.

[Actually Azmin has voiced his wish for PKR to contest in Sungai Besar, and as quid pro quo, promised to leave Sabak Bernam federal constituency for PAS in GE-14 - and just who the f**k is Azmin to promise PAS the seat of Sabak Bernam unilaterally without consulting Pakatan allies?]

Pakatan must ensure Amanah stands in the by-elections for the two federal seats, with or without Azmin and PKR.

In the end, we must ask Azmin Ali: Are you with PAS or Pakatan (Amanah, DAP)? Just showing sympathy for Lim GE on the matter of MACC raiding the latter's house is just not good enough.