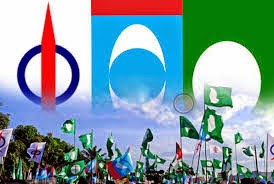 PKR vice-president Rafizi Ramli ... The former PKR strategist noted that although the federal opposition pact had succeeded, to some extent, in steering voters to pledge support for its issue-based policies in the last federal polls, there are still large pockets of the society that identify better with a race-based cause.

“The Malay psyche is that PAS and Umno represent the Malay agenda and both are considered a Malay-based party.”

Hmmm, I am not so sure about the assertion that the Islamist party holds the key to unlocking crucial votes from Malaysia’s Malay heartland.

No doubt there are reportedly around 60 federal seats which are marginal seats for both PAS and UMNO, where the 'nons' could play kingmaker in their decisive votes. But this is quite different from the claim that the Islamist party holds the key to unlocking crucial votes from Malaysia’s Malay heartland.

The reality is PAS needs DAP and PKR more than DAP and PKR need PAS. The putative winnable 60 seats mentioned above has been the sole reason Pak Haji Hadi Awang has forced himself to be tolerant (to a certain extent) of DAP. He still wants Chinese and Indian support for PAS to win these seats. But I believe he is not sincere to the Pakatan multiracial and democratic concept.

Yes, DAP and PKR, especially PKR, can suffer some seat losses if PAS supporters do not back them in those marginal seats in the next general elections.

But why wait until GE-14 when we have already seen PAS hold-back in GE-13 in Sungai Aceh (Chegubard) and also in the Teluk Intan by-election (Dyana Sofya) though admittedly the latter was additionally complicated by suspected internal DAP merajuking over the parachute candidate and the weekday polling day.

PAS can also participate in a spoiler role (3-corner fight) to benefit UMNO, especially when PKR (or any other Pakatan friendly party like PSM) is competing - example, Kota Damansara in 2013.

But given PAS right-wing stand on both race and religion, do DAP and PKR, especially DAP, want to nurture a cobra in their bosom?

I have often blogged on this issue before. It was only an Anwar Ibrahim's conceived Faustian Pact that has allowed socialist-secularist DAP (and forget about those minority hallelujah-ing DAP members) and Islamist PAS to work in a coalition against BN. And it has to be said the short-term success of this coalition has been very much to Anwar's political credit.

The reason for Pakatan shying away from the imperative of a shadow cabinet is obvious but the consequences are nonetheless discouraging, depressing and augurs that the coalition can only be in a short-term relationship, which will be ended the moment the centrifugal effects of the component party's different ideologies and different interests bite in.

A long term coalition can only survive when the stakes, shared equally or pro rata or even a la Taikoh-decides-best, are laid out in a clearly defined chart.

Even the often believed Pakatan agreed PM-designate of Anwar Ibrahim was shaken when Pak Haji Hadi Awang insinuated his claim (by stealth) to that post.

Talking about Pak Haji, recall how he had been (and presumably still is) of one mind with his erstwhile party deputy president Nasarudin Mat Isa, in their Malay Unity proclivity.

The reality about 'racial unity', whether this be of Malay, Chinese, Indian, XYZ variety, is that it is racist in nature and harbours belief in ethno-supremacy over other races.

If unity is desired it should be Malaysian national unity, and not of race.

But I suspect Pak Haji suffers from 3 grievances which will not allow him to be sincere in his commitment to Pakatan, these grievances being: (a) his personal long rivalry with his erstwhile ABIM matey, Anwar, wakakaka, (b) his belief that PAS with its claimed superb party network and strength is and should be treated as the primus inter pares in Pakatan, and (c) his belief in his Islamic cause, though he somehow fails to see this cannot exist within an ethnocentric mindset that he and Nasarudin Mt Isa hold dear in the deeper recesses of their 'hearts' and minds.

If this issue of PM-designate cannot be settled within the Pakatan working framework, how then would a shadow cabinet be possible?

No shadow cabinet, no workable alliance, then no possibility of being in a workable government.

Yes, Selangor 2014 is an ominous harbinger of what a Pakatan majority government will be after GE-14.

While politics is the art of the possible, there has to be a limit, i.e, short of a Faustian Pact in working together with PAS.

While it's natural for a political party like the DAP to aspire to majority rule eventually, either in a coalition or even by itself, I urge the party not to be stampeded by the personal agenda and timeline of Anwar Ibrahim who is known to be impatient and whose entire once-glorious career was let down by this, his Achilles heel.

It would be true to say that the concept of Pakatan, one in which a socialist-secularist DAP was brought to work with PAS, obviously a working relationship of dubious but undeniably short-term fashion, has been born out of Anwar's most un-manamanlai impatience to be PM.

Regardless of whether the Erdogens take over PAS, its stripes, fangs and predatory (big cat) scent are now more than ever very obvious to the Chinese and Indians.

And the Chinese in particular love to punish political parties which they believe have betrayed their cause or interests - recall Wong Pow Nee's Perikatan in 1969, Gerakan in 2008, MCA in 2013, wakakaka.

Read also: The torment and impatience of Anwar Ibrahim
Posted by KTemoc at 11:50 am