Sedition! For what purpose?

While we continue to wait as Rome burns, and Pak Haji Hadi Awang goes about his wayward way to "protect Malays", we see a number of sedition cases being actioned by the Police, presumably on the instructions of our remarkable AG. 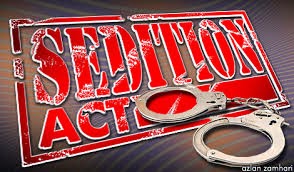 But surely the case that takes the cake must be the one confronting Penang ADUN, RSN Rayer (Seri Delima).

Rayer had uttered the words "celaka UMNO" (damn UMNO) inside the State Assembly on 20 May this year.

Firstly, when was it that the words "celaka UMNO" or "celaka DAP" or "celaka whoever" (other than the Sultans) could be considered seditious?

Maybe the answer lies in my penultimate paragraph, wakakaka.

Secondly, Rayer said those words inside the State Assembly, meaning he had enjoyed parliamentary privilege. The only person who could tell him off or punish him would be the House Speaker. A similar case occurred in the federal Parliament in March 2009 when Gobind Singh Deo called the PM a murderer.

Gobind wanted Najib to respond to opposition accusations that he had a hand in the killing of a young Mongolian woman in 2006. Gobind shouted "Answer me, you murderer" before Parliament's speaker ordered him to leave the hall.

A Cabinet minister made a formal proposal Monday to suspend Gobind without pay for a year, saying he was in contempt of Parliament and that he had committed a breach of his rights as a legislator.

Government lawmakers approved the proposal through a unanimous vote after opposition legislators staged a temporary walkout to protest the move.

Personally I thought it was intemperate of Gobind to use such words and the action taken was appropriate though unduly harsh (one year suspension including and particularly depriving him of pay).

And even if the words "celaka UMNO" could be preposterously considered as seditious (and what f**king nonsense would that be!), the Speaker should be the only one to discipline Rayer.

To charge Rayer for saying something inside the State Assembly will be in contempt of the state parliament. I'm not sure whether it's a jailable punishment for contempt against parliament, but it should be as it's attacking the sovereignty and power of the people.

Okay Police, go charge the AG and yourself for sedition (contempt against the Penang State Assembly) wakakaka.

But I ask myself WTF is going on for Pakatan MPs (Khalid Samad, Nizar Jamaluddin, possibly Rafizi Ramli) and ADUN (Rayer, anyone else?) to be charged for sedition on flimsy grounds?

Compare their supposed seditions with those of Dr Affifuddin Omar, a former UMNO MP for Padang Terap.

This bloke's fame or notoriety was achieved on 10 December 1992, when in parliament he walloped the rulers as follows:


"How can we continue to uphold rulers who are known to be robbers, adulterers, drunkards and kaki pukul(thugs)?" [...]

"They (the rulers) must be made to realize that they do not own this country. They are not Superman but placed on their thrones by the people."

"The real power did not lie with them, but with us - the representatives of the people."

Aiyoyo, rulers who are known to be robbers, adulterers, drunkards and kaki pukul (thugs)?

So, do you think his daring do was approved by UMNO leaders at that time, wakakaka. Incidentally he is a Kedahan, wakakaka.

Oh yes, the UMNO No 1 at that time was Dr Mahathir and his No 2 was Ghafar Baba. Phew, I suppose some of you might have been thinking: aiyoyo, this bloody kaytee wants to wallop His Reformasi Excellency again.

No no, His Brahmic Excellency was only No 3, the Finance Minister, though he would become the No 2 (and thus DPM) the following year after he defeated and humiliated an aging Ghafar Baba, one of the original UMNO members, who would have retired in a mere 6 months time.

But on 2nd thoughts, wakakaka, Professor Bari had said that there should be collective cabinet (and presumably top UMNO echelon) responsibility on issues, including the walloping of the rulers behind parliamentary privileges, wakakaka.

But I'm sure Manmanlai must be lily-white innocent, as he had always been in his 16 years as various ministers in Dr Mahathir's government, wakakaka. Sorry anwaristas, couldn't help slipping this in, wakakaka.

Anyway, I wonder whether we ought to admire Dr Affifuddin Omar because he dared play with fire and yet, somehow got away with that, unlike Rayer with just a mere "celaka UMNO", wakakaka.

Then there was also Wan Hanafiah Wan Mat Saman, once the UMNO MP for Pokok Sena, though he lost his parliamentary seat to PAS' Mahfuz Omar in 1999? wakakaka.

In 1992 he said in a speech in Parliament that he preferred the Malay Rulers be treated the way the Indian Maharajas were treated, stating:

"After the struggle for India's independence in 1947, Deputy Prime Minister Sardar V Patel was given the task of negotiating with the Rulers to phase out them.:

"Patel rounded up the Maharajas and put them in a hotel. On the first day of discussion, he could not get them to agree to the Government's proposal.”

"On the second day, he placed soldiers around the perimeter of the hotel. On the third day, he cut the electricity supply; on the fourth day, he stopped the water supply and on the fifth day, he stopped food from being brought in. On the sixth day, all the Rulers, who were confined to the building, agreed to the government proposals.”

Continuing his speech, Wan Hanafiah said that "a similar approach could have been taken to solve the present problem with the Rulers."

[above quoted from a post at Dewan Pemuda PAS Serdang blog]

Wow, slaughtering our rulers like chooks a la the Maharajahs? wakakaka. And poor Rayer, with the same parliamentary privileges, will be charged tomorrow (Wednesday) for saying inside the state assembly the words "celaka UMNO" [and who the f**k is UMNO compared to the Rulers?].

Are these gross persecutions (and prosecutions) against Pakatan politicians nothing more than a Najib-Zahid grand-staging to show the Heartland that even without the ISA, the Najib government is still firmly in control, and that Dr Mahathir has been unduly and unnecessarily worried and stirring shit for no purpose, and thus to be ignored for crying out "the sky is falling down, the sky is falling down!"? Wakakaka. 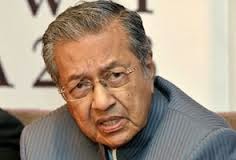 (meaning the truth about Church and State), wakakaka.
Posted by KTemoc at 4:30 pm