Penang Island has the most number of angsana trees [Pterocarpus indicus] that are over a century old, yes, 100 years old, in a city. Known as angsana or sena in Malaysia and Singapore, this marvellous tree is called narra in the Philippines, sonokembang in Indonesia, and pradoo in Thailand. 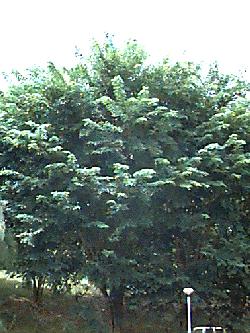 Whenever such trees managed to survive so-called progress, it's great news. Now, more than 100 years old is certainly a record of sorts, so with our Malaysian penchant for recording any superlatives, especially with such an admirable one, the Penang Municipal Council is talking about submitting this fact for entry in the real Guinness Book of World Records. 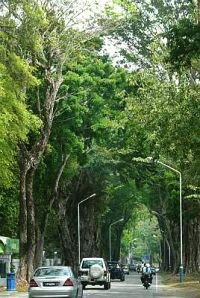 My memory of Penang's roads is a wee hazy today but I recall there's a road called Jalan Scotland that joins Jalan Mesjid Negari [Greenlane Road] to Jalan Waterfall? That road has or had wonderful angsana trees, as do or did Jalan Waterfall.

As a young laddie, I enjoyed many happy hours catching fish in the river that flows all the way from Ayer Itam past between Batu Lanchang cemetary [I have a story on this] and the old folks home of the Little Sisters of the Poor [another story here], then behind old Greenlane [where I lived as a small kid in Jalan .....], and by Mesjid Negeri, the State mosque, to behind Jalan Scotland before it cuts across this road to meander through the Yang Di Pertua's [Governor's] residency.

I am very much out of touch as I last saw this river 8 or 9 years ago, so I could well be talking nonsense.

But my most wonderful experience was cycling, walking and frolicking beneath those gorgeous gigantic angsana trees lining Jalan Scotland, Jalan Waterfall all the way to the Botanical Gardens.

And in April each year, the golden blooms of these wondrous angsana would carpet the roads. However, on rainy days the fallen blooms posed a slippery danger to motorcyclists. Since the flowering of the angsana coincides with Cheng Beng [Chinese All Souls Day], Penangites call the angsana blooms Cheng Beng hwa [flowers of Cheng Beng].

Will the contruction of the Penang Outer Ring Road [PORR], that's now being launched, cause any of those arboreal patriarchs to be chopped down? I'll be pretty mad if it does!

So much history, so wondrous a sight, so delightful a shade for the people.