Most of us are familiar with the many articles written by Bakri Musa, but for those of you who aren't, the author is a Malaysian expatriate practicing as a surgeon in California. Don't ask me whether he is now an American citizen or still a Malaysian citizen only resident there, though I suspect he must be the former.

Anyway, in this post I'm going to touch only on his narration of Royal Professor Ungku Aziz as I'm sure you are already quite familiar with RPK, wakakaka.

Many know of Ungku Aziz, a man of many firsts. I will not enumerate them because they are not pertinent to my story. To me, he is a man whose insight on rural (and thus Malay) poverty is unmatched. Equally unmatched is our present leaders’ inability or unwillingness to tap his vast expertise. [...]

In his studies Ungku Aziz discovered that the reality was far different. Malays were indeed diligent savers as attested to the ubiquitous bamboo tabongs in Malay homes. We saved for weddings and of course for a trip to Mecca, the aspiration of all Muslims. However, we did not use conventional savings institutions like banks because of our religious prohibitions against ribaa (interest).

It is a tribute to the genius of Ungku Aziz that he not only identified the problem correctly (key towards solving it) but went on to create institutions that would cater to the specific economic needs of Malays. Thus was born Lembaga Tabung Haji, a mutual fund-like financial institution that takes in Malay savings, especially from rural areas, and invests them in halal enterprises (meaning, no casinos or breweries). The returns on such investments were rightly labelled as faedah (dividends) and not bunga (interest), thus satisfying Malay religious sensitivities.

Today Tabung Haji is one of the largest financial institutions in Southeast Asia, a tribute to the brilliance of one man, one whose mind is not trapped by the conventional wisdom and thinking.

I would like to add two more stories of Ungku Aziz to the above (extracted) narration, both perhaps not in the same shade or tone as Bakri Musa has brought out, wakakaka, but mind, one will demonstrate Ungku's innovative thinking while the next will show his social-political courage.

First, let's see his innovative thinking and his love of 'Malay-ness':

It's about the Malay bomoh (a shaman or in more derogative description, a witch doctor, wakakaka).

Consulting bomoh has been an intrinsic part of Malay culture, which I dare say, due to the unique, wakakaka, muhibbah of our society, some Chinese, Indians and a few Eurasians have also done, wakakaka again.

Yes, there are 3 'wonderful' social activities that bind us, Malaysians of all races, closely like bro's and sis'. These are:

(a) sports especially those which gamblers can bet on like football, badminton, basketball, etc (wakakaka),

(b) the mathematically-challenging-and-promoting 4-Ekor, a Malaysian weekly lottery which unfortunately for our pockets (and fortunately for someone who was 'gifted' the 4-Ekor licence, nudge nudge wink wink, wakakaka) occurs more than once a week.

At the numerous 4-Ekor shops all over town and even in Chinese villages, one can see mingling multiracial muhibbah and multi-hopeful (wakakaka) crowd on lottery-days, and the magnanimous policemen who would be so tolerant of double and even triple parking outside those 4-Ekor shop, probably courtesy of management's prior arrangements (wakakaka), and

My uncle told me that during the days of PM Tunku, the Vice Chancellor of UM, then our only university, was, I believe, Prof Ungku Aziz who did the unusual when the construction of the university's great hall was completed and to be officially opened with fanfare.

The professor engaged a bomoh (a more dignified one than Raja Bomoh, I was told) to consecrate the great hall, which he did in an open ceremony where there were a number of invited guests including VIPs and foreign dignities, wakakaka.

Ungku Aziz was 'big' on Malay culture and he reckoned a bomoh consecrating the hall would offer the ceremony a nice touch of Malay traditional culture, wakakaka.

The bomoh hired for the occasion, with his complete set of occult paraphernalia, gave the ceremony the full nine yards including burning incense such as kemenyan (gum benzion) and sprinkling scented holy water, imploring the spirits of Earth's four corners and the dewa's and dewi's of every known description to bless the hall and the university students.

I wouldn't be surprised if he had turned Hindu, Catholic and Orthodox Church's' priests green with envy, wakakaka.

A few Malays grumbled but most smiled at his Malay-ness or cultural eccentricity. The unique ceremony was reported in most of the mainstream newspapers, and that's how my Unc came to know about it.

Today I doubt any Malaysian university VC would have the balls to do such a thing, that is, acknowledging the village bomoh as a quintessential part of Malay traditional culture, wakakaka. But the bomoh is definitely more Malay than a camel, even one which a hubby could enjoy sex with wifey on its back, wakakaka.

Oh, by the by, I wonder what happened to Raja Bomoh who we are told would be investigated for un-Islamic activities by Jakim or one of the other JA-organization? 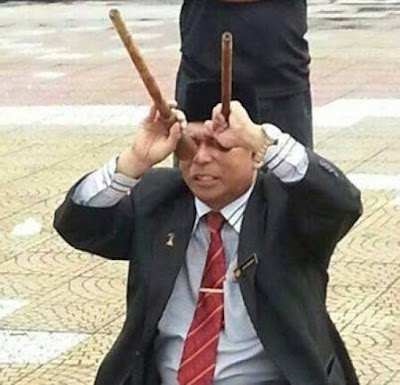 Hmmm, maybe they're too scared of him to pursue that investigation, for fear he might have one of his occult jampi-ed bamboo apparatus up their @$$e$? Wakakaka.

OK, next we'll examine how Ungku Aziz demonstrated his bold social-political courage on a so-called 'sensitive' issue, to wit, our notorious 'social contract'.

Only and only in Malaysia does this term connote various meanings for different sets of people.

To UMNO-putras and their supporters, it’s their mantra of the inviolability of Ketuanan Melayu, their passport to guaranteed power, position and personal prosperity via the never-ending Malay ‘special rights’, something apparently carved out in bold print on the 'steel plate' of their mentality and totally unerasable, though in the Malaysian Constitution there is no mention of 'special rights'.

Rather, Article 153 of the Constitution grants the Agong responsibility for 'safeguarding the special position of the Malays'.

To other Malays in general, 'social contract' is something, whatever it is, which requires them to keep a beady eye on those sneaky Chinese, who would undoubtedly try to undermine and do away with it – oh, trust or don't trust those greedy ungrateful Chinese, wakakaka.

But to the non-Malays, it’s the typical UMNO self-serving bullsh*t that constantly reminds the 'nons' of their second class citizen status, and that they are (2nd class) citizens of Malaysia only by the generosity and tolerance of the Malays.

And as quid pro quo for their (2nd class) citizenship, the 'nons' must behave kuai kuai and never ever question Malay ‘special rights’.

Indeed, in 2008 the then crown regent of Kelantan at a forum organized by Barisan Bertindak Perpaduan Melayu, a group of very conservative Malay NGOs, reminded us precisely just that, where in one fell swoop he categorised and separated his (future) subjects into the master race and ‘nons’ – for more, read Kelantan Crown Prince 'slapped' non-Malays in face!

Yes sir, Tengku Faris Petra (then crown prince, now sultan) told Malaysians of Chinese, Indians, Eurasian, Thai and others of non-Malay ancestries that there [was] to be no ‘equality’ for them vis-à-vis Malays.

He had then stated: “... the rakyat must unite and never raise issues regarding Malay rights and special privileges because it is a quid pro quo in gratitude for the giving in of citizenship (beri-paksa kerakyatan) to 2.7 million non-Malays into the Tanah Melayu federation."


“Thus, it is not appropriate for these other ethnic groups to have citizenship, only (later) to seek equality and privileges.”

But Malaysiakini subsequently reported what we knew all along but couldn't/wouldn't openly say without being threatened with the usual keris, tebuans and the threat of another May 13.

Without going into history, the Reid Commission, the Constitution, its Article 153, NEP, NDP etc etc etc, let's focussed on what Malaysiakini had then reported, to wit, that Royal Professor Dr Ungku Abdul Aziz made a statement declaring there was no such thing as a social contract between Malaysia's diverse ethnic communities.

Professor Ungku Aziz said that the social contract was "a fantasy created by politicians of all sorts of colours depending on their interest."

Well, it has been for some a most profitable fantasy, while for the other side, a frustrating one - but it's a fantasy that has been vigorously implemented, realized, enjoyed and fiercely defended, though it has to be said that more than a few non-UMNO Malays and non-Malay bumiputeras have yet to benefit from it.

He believed whatever contract there was, it was more of an ‘economic contract’, what most countries would call 'affirmative action', in areas of education and health for groups that needed it the most.

Wakakaka, of course Mahathir disagreed with the Royal Professor but conceded that there weren't anything written down in black and white. He averred that the so-called social contract was an [unwritten] 'understanding' among founders of Tunku Abdul Rahman’s Alliance or Perikatan government. How convenient!

A certain UKM professor who obviously didn't agree with the Royal Professor was reported to have made a sad shameless snide remark, stating “I don’t know what he [Ungku Aziz] reads aside from economic books”.

But that's the courage of Royal Professor Ungku Aziz in speaking out the truth on a matter very dear and even sacred to the hearts of UMNO people like Mahathir and the UKM professor.