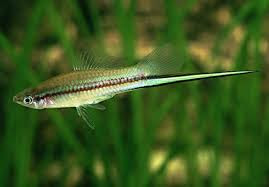 It is a freshwater fish native in Central and South Americas, known to us by its popular name of swordtail. Xiphophorus in Greek means just that, sword-tail.

Wikipedia informs us that Heller was an Austrian botanist and naturalist who explored Mexico in 1845–48. He collected the green swordtail, which today in its many many hybrid forms is one of the most popular freshwater aquarium (or pond) fish.

Once, in my kiddy days, I kept a number of its more fancy looking hybrids. 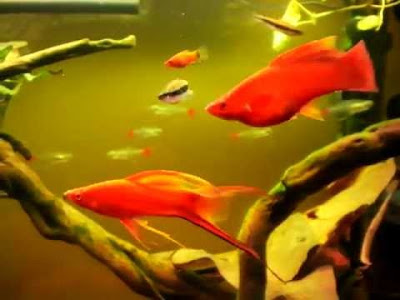 Allowing the fish to breed in my home aquarium I was deeply disappointed when the offsprings didn't look anything like its beautiful colourful parents. In fact they were pathetically ordinary looking.

My uncle told me that it's quite common for such fish hybrids to produce offsprings that reflect more accurately its original form, nature's way of reverting the hybrid to its true form.

It's as if hybrid-zing what had been a common looking fish into something very aesthetically pleasing to the eyes won't hide nor change its true character or characteristics for long.

That, my dear readers-visitors, seems to reflect the nature of Pak Haji Hadi Awang, wakakaka.

In the runup to and even after GE-12 in 2008 Pak Haji presented to us a very pleasing picture of his Islamic welfare state and his kind embrace of non-Muslims.

But following the sad departure of the more senior Pak Haji, Allahyarham 'Tok Nik Aziz, Pak Haji Hadi, not unlike such a 'reverted' swordtail, has abandoned his earlier fatherly and supra-nationalistic personality and reverted to his true nature, his real character.

Take your pick, a swordtail fish which has reverted to its original form, its true self, or a leopard which hasn't changed its spots, or fangs. 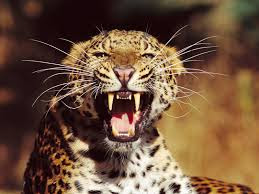 Indeed Pak Haji has recently showed another aspect of his true nature, willingly moving from compassionate Islamic grounds into the ultra-nationalistic ethnic cesspool.

No, I'm not talking about his post GE-13 falling out with DAP (his right to do so) nor his cozying up to his new sweetheart UMNO (again his right to kiss and make up with the Mothership), nor about his acceptance of PKR behaving sluttishly to PAS.

Two days ago our dear Pak Haji, so-called esteemed Islamic leader, flabbergasted everyone (except his PAS minions) by saying, as reported by FMT, that
DAP and Singapore support TPPA as ”Chinese control trade”, of course reminding his followers that both DAP and Singapore are Chinese.

FMT reported: In a three-minute video posted on his Facebook today, Hadi accused DAP and Singapore of supporting the trade pact because a single race dominates commerce.

“DAP agrees to it, Singapore agrees to it. Why? Because the Chinese control trade in Malaysia.”

He urged PAS’ party members to come out in support of tomorrow’s anti-TPPA rally. “It is the Bumiputeras who are tired of the TPPA.”

Let's leave his racist outburst for a second or two and make mention, just for discussion's sake, that there has been some (global) analysis the American TPPA is a US economic manoeuvre to marginalize or even subordinate China, in other words, strategically anti-China in character and purpose, so what rubbish is Pak Haji talking about Chinese supporting TPPA, just because they control trade.

Syariah-compliant Brunei also supports the TPPA, being a partner since 2006 and having officially signed up as a member in 2008. Shall we blame the Chinese again? 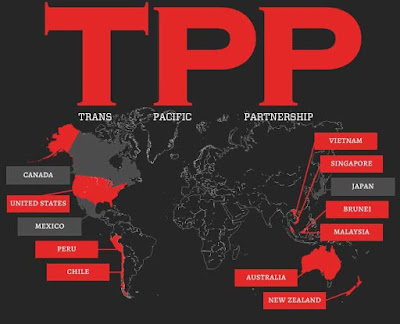 Hadi Awang, the leader of PAS and so-called defender of the Islamic faith, has reacted to TPPA rather than coming out with an analysis as to why Malaysians should oppose the agreement.

He is opposed to TPPA not so much because it has dangerous political, economic and social implications, but rather because he thinks, though wrongly, that the DAP, its one-time friend now turned foe, supports it!

The DAP has made it clear on many occasions that it would oppose the TPPA because of its negative implications on the people.

By saying that the DAP favours the trade pact, Hadi betrays his own ignorance and lack of understanding of the broad implications of the trade pact on Malaysia and to other developing countries.

I have always respected Islam because of, among other things such as zakat and fasting, the religion's non-racial promotion.

Pak Haji has by his ignorant and very racist accusations seems eager to persuade me to abandon my belief. He has become an abysmal example of a so-called Islamic leader and a disgrace to the great religion of Islam.