Hard times ahead for Malaysians

Forget about the bullshit politics that have been raging for the past several months in various regions in Malaysia - constitutional crisis in Selangor and a Lite version in Johor, seditious charges in Penang, secession calls in Sabah and Sarawak, etc. 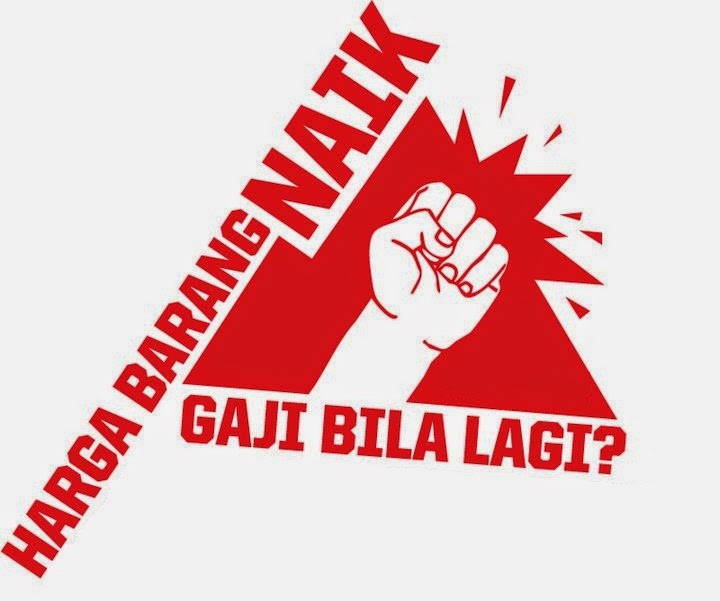 What the government is worried about have been, unfortunately, many issues, among them the ISIS Islamist agitation with Malaysian participation (and worse, their return to Malaysia), rising cost of living and the threat of poverty-related crisis for retirees.

KUALA LUMPUR, Oct 5 ― Malaysia may be headed for a retirement crisis as tens of thousands of Malaysians depart the workforce for their golden years with less savings than is needed to keep them out of poverty.

According to recent figures from the Employees Provident Fund (EPF), the approximately 70,000 active 54-year-old contributors have an average savings of just under RM167,000 last year. The recommended minimum savings level is RM196,800.

The situation is made more alarming by the revelation that 69 per cent of all EPF contributors of the same age have less than RM50,000 in their accounts, as made known by the fund’s chief executive, Datuk Shahril Ridza Ridzuan, last month.

But even RM167,000 is scant consolation. As the average Malaysian expected to live until 75, retiring at 60 with that amount would mean surviving on just RM700 a month for the rest of their days.

With that amount, retirees would technically slip below the RM830 per month threshold that is indicative of poverty conditions in peninsular Malaysia, based on the Statistics Department’s poverty line income (PLI) for 2012.

When a significant segment of the rakyat lives in poverty or near poverty, the country may expect social unrest.

For example, China is shit scared of this issue and seemingly unusual for a dictatorship, but then wisely for its government, the authority has been sensitively responsive to public outcries and demands. The Chinese authority is known to be working extremely hard, nay, even desperately to see wealth distributed more evenly to the rural poor, before the Marie Antoinette's shit hits the Chinese fan (wakakaka).

Other countries like Australia also faces retiree-related problems but of a different kind, where it's more to do with a growing retiree population who is living longer wakakaka, coupled with a declining tax-paying younger population - in other words, the tax collected for the present and future is seen as insufficient to cope with the retiring (and to the government's dismay, longer living) pensioners.

Incidentally, Aus has a national pension scheme which pays pension to every of its citizens and PR, but subject to an asset-income test - in other words, if one doesn't have enough to get by (according to a national set criteria), one will be paid a certain amount of pension by the government. This could also include government assistance in reducing electricity-water bills, land rates, etc.

In the last, namely, government assistance in reducing electricity-water bills, I have heard of an unofficial Malaysian version where in some places, such bills are never issued, nor enforced in collection, wakakaka. Is this true?

Now, if only Malaysia has such a scheme, then the really-needy pension-age rakyat like retired rubber tappers (not estate owners), garbage collectors and those without much or some form of pension income (like the dhoby women who washed clothes by the stream behind my house and the wood cutters in my Ayer Itam village in Penang who sold their cuttings to housewives) would have received government pensions.

Do you remember my narration of an old itinerant village barber Subramaniam in my March 2011 post OK and KO-ed Indian Malaysians? I had then written: 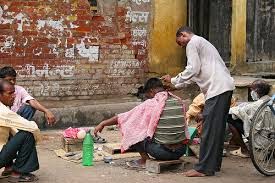 Then there was Subramanian. Subra was a wandering barber in my village. He plied his trade by walking around and seeking out known clients (like young kaytee), while carrying an old small suitcase which contained his equipment including the barber’s sheet.

His village trade eventually disappeared in the face of growing affluence in society and the appearance and greater attraction of girlie barber salons, which provide not only haircut complete with shampoo and drying, but also ear cleaning (I could never take the ‘pain’ of the scrapping though I think it was more psychological than actual physical pain – I dreaded the very scary thought of the sweetie plunging her traditional Chinese-designed ear de-waxer right through my ear drums, ouch & gulp!); there was of course the massaging as well, yup, of zones way beyond the region of the head.

All poor Subra could provide by way of competition was the old fashioned Thuggee-style twisting of the neck to produce a couple of satisfying but frightening 'cracks' (or snaps) – at times I wonder whether he was going to break my neck. But poor Subra’s livelihood inevitably succumbed to modernity and his personal problems, mainly excessive toddy.

Unlike the mee rebus Aneh, he became a total failure. The last time I saw Subra was years ago when I returned home for Chinese New Year celebrations. Shabby, unwashed and smelling of various odour, especially stale toddy, he staggered into my house to pay me a CNY visit. Naturally I welcomed the elderly Uncle and invited him for a drink of, no, not toddy, but traditional F&N sarsi. Declining my welcoming drink he asked rather bluntly whether I could spare him a couple of ringgit.

I always have a soft spot for Subra, despite him occasionally giving a then very young kaytee a cuff or two on the head for not sitting still when he was cropping my hair. I gave him RM20 which saw him seeking leave from me straightaway to hunt down the village Chinese samsu shop man (because it was CNY and the shop was closed). I haven’t seen Subra since that sad parting.

Here we have two examples of Indian Malaysians where one has been innovative and extremely successful while the other gradually became a failure, owing to his inability to cope with the changing business scene of barbering and his own indiscipline.

So how man? In the last half a century there’s more Subra’s than mee-rebus Aneh’s. Yes, there were, have been, are and will be the Chinese equivalents of Subra but never to the shocking numbers in the Indian community.

May I, without offending anyone, say something about the difference between pathetically poor Chinese and pathetically poor Indians? There’s a noticeable lack of support for and within the latter group, unlike the poor Chinese. In this (kaytee’s observation) I believe the MIC has a lot to answer to, especially when you read of the son of a MIC bigwig boasting he housed his German Shepherd pet in an air-conditioned kennel.

Poor Subra would have benefited from such a Malaysian pension scheme a la the Aus one which does the right thing for its citizens, and which could have given him a better last few years in his sad life.

But alas for poor old Subra, for all our bloody f**king oil/gas/timber/palm oil/rubber/etc and the bloody f**king billions we bloody f**king wasted away, we don't have one. Mind, we could chuck a whole Proton Saga into the Arctic, and even talked about wrapping an entire Egyptian Pyramid with batik, and which we would have done if the Egyptian Minister of Antiquities didn't tell us to f**k off!


Bet you poor old Subra would have perished by now, probably of alcoholic poisoning in some back lane, un-missed and un-mourned by all saved kaytee and a few of his long time clients (kaytee's village classmates).

Former Aus PM Paul Keating during his days as both Treasurer (Aus equivalent of Finance Minister) in the Hawke government and as PM had wisely advocated higher or increased national work-related saving contributions a la EPF, but faced enormous opposition from (naturally) employers and their Liberal Party-National Party backers, and (sadly & stupidly) the workers themselves who wanted the pay straight away in their own pockets (no doubt expecting the government to look after them when they're retired).

In Malaysia's case it's due to insufficient savings by the pensioners, even with the EPF. Since it has to do with EPF, somewhere along the line, there has been awful bad planning by our authority. The Malay Mail Online report continues: 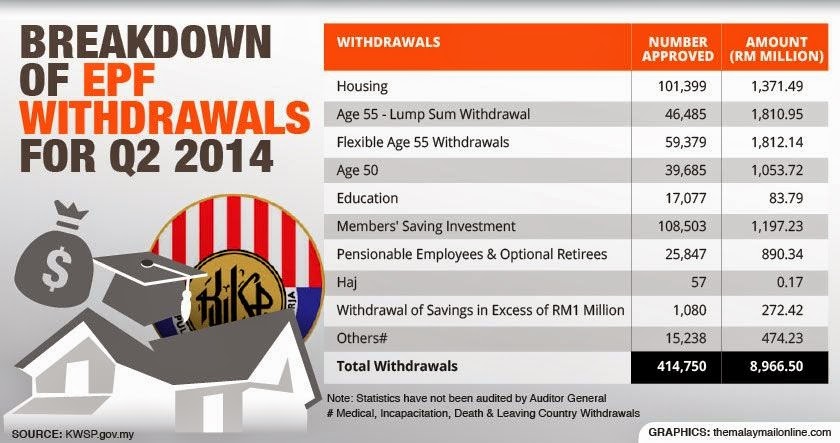 According to Harveston Wealth Management financial adviser Annie Hor, a nest egg of RM167,000 could be made to last, but only if the retiree is completely free of debt and need not pay for accommodation.

“Otherwise you would be suffering a bit because if you just want a simple life, with three meals a day, maybe just get from point A to point B, petrol, you would need at least RM1,000 to 2,000 per month because, not forgetting when you are older, medical bills are expensive,” she told Malay Mail Online recently.

She added that her 60-year-old mother needs at least RM2,000 to get by in the city, even with her simple lifestyle.

So 2 grand monthly gets one by but for an improved lifestyle, one needs more than 2 grand per month.

Australia's strategy to overcome the pending pension deficit (short term as it undoubtedly is) has been to make people work longer, that is for them to retire much later in life. Sometimes I wonder whether the Aus government secretly hopes the would-be retirees would die in their work prior to retiring, and thus without imposing a long term burden on the younger and smaller-population tax payers?

Will we see Malaysia opting for and encouraging a longer working term until the average retirement age becomes at least 65 (Aus is now talking about 70)?

Apart from forcing people to work longer in their short life spans, this will require the government to expand the working force significantly in order to cater also for the younger population coming into the work force annually.

This is what Malaysian politicians should be worried about, and not about the bullshit politics that we have been getting recently. 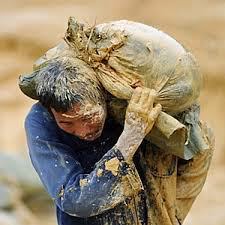