KUALA LUMPUR, April 2 — With the country well into its third week of a movement control order (MCO) to stem the rate of Covid-19 infections, the Health Ministry has regularly shared wellbeing tips — both mental and physical — via its various social media channels.

Today’s tip posted on Twitter revolves around what parents of young children can do to alleviate the boredom that comes with being cooped up indoors all day.

However, it is the accompanying caption that has raised a few eyebrows.

“Suitable home activities to prevent boredom among small children or their parents. Perhaps you can try mimicking ‘Doraemon’s voice’ to keep young ones entertained,” it read.

This appeared to be a reference to a poster released by the Women’s Development Department on social media earlier this week.

It offered suggestions on how wives can educate their spouse on doing household chores, to presumably avoid quarrelling, among which was the advice that they adopt a “Doraemon-like” tone when speaking and giggle coyly as opposed to “nagging”.

Although the post had only been up for 30 minutes at the time of writing, it didn’t take long for social media users to respond. 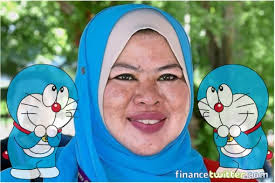 “Wow can feel the sarcasm,” user @merryrjay tweeted in reply. 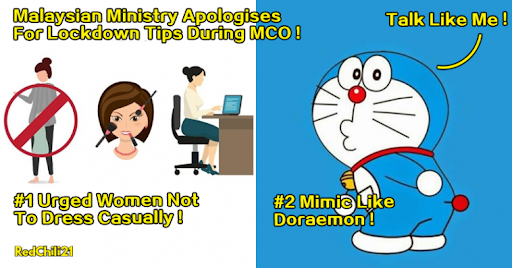