Malaysia where higher is lower, and vice versa 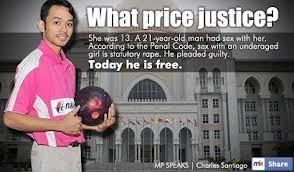 KUALA LUMPUR, March 18 — Non-Malays are likely to be more accepting of statutory rape, Datuk Wan Junaidi Tuanku Jaafar told Parliament today, in reply to a question on the low incidence of reported cases of sexual violations among Malaysia’s minorities.

The deputy home minister appeared to suggest that the lower level of tolerance among the country’s largest community for sexual predators who prey on minors is a contributing factor to the high number of cases involving Malays.

“This doesn't mean the cases mostly involve Malays. Because Malays are culturally more sensitive about its youth so there are more police reports about it.

“Non-Malays are maybe more accepting about it so the margin (is lower),” Wan Junaidi said in reply to Setiu Barisan Nasional MP Che Mohamad Zulkifly Jusoh during Question Time.

The Santubong MP said that in 2012, there were 1,550 reported incidents of statutory rape, with Malays taking the top spot at 48 per cent, followed by the Chinese at 5 per cent and Indians at 3 per cent.

On the basis of his bizarre conclusion, non-Malays are more likely to be accepting of incest, because the Malays have been the ones having several reported cases of incest.

Additionally, non-Malays are more likely to suffer from mass hysteria because the Malays have been the ones having reported several such cases.

Non-Malays are more pious too because Malays are reported as pious, according to the bizarre logic of Wan Junaidi, who somehow has become deputy Home Minister when he is the Minister of Natural Resources and Environment.

Has he been demoted into Home Affairs? With his bizarre logic, one shouldn't be surprised.

But worst of all, and we know of it, non-Malays sometimes escaped charges of statutory rapes because they married their underage victims.

That's because non-Malays don't report when they suffer from mass hysteria as they are likely to be more accepting of it.