Hadi Awang's lack of self confidence? 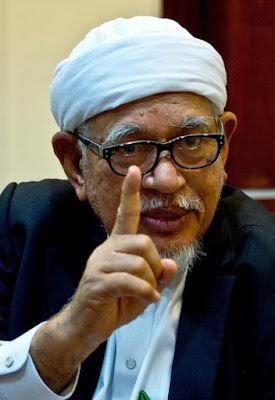 KUALA LUMPUR, Dec 22 — PAS insisted yesterday that its president Datuk Seri Abdul Hadi Awang visited Iran to attend an annual congress on behalf of the Islamist party, following a rebuke from the International Union of Muslim Scholars itself.

Datuk Dr Khairuddin Aman Razali, who had escorted Hadi to a similar trip last year, said the latter had spoken on how Syria became a victim of a proxy war among foreign powers.

“PAS stressed that what happened in Syria is a consequence of a proxy war that wish to tear apart the unity of the community, and the influence of foreign powers in a conflict zone,” the PAS Ulama wing information chief said in a statement.

Had it been some other Malaysian Muslim (who by decree has to be a Sunni), attending an Iranian organized congress or get-together in Teheran or anywhere else in Iran, he would have got it in the arse and then some.

The 14-century old enmity between Sunni and Shia Muslims are far far far worse than the division between Catholic and Protestant Christians.

Wikipedia tells us the origin of the Islamic schism was in 632 CE, when a dispute over succession to Muhammad as a caliph of the Islamic community spread across various parts of the world, which led to the Battle of Siffin.

The dispute intensified greatly after the Battle of Karbala, in which Hussein ibn Ali and his household were killed by the ruling Umayyad Caliph Yazid I, and the outcry for revenge divided the early Islamic community.

Thus the mutual hatred has spread down over the centuries into today's Syrian War waged between the ruling (Shia) Alawites and Sunni Muslims.

Alawites or Alawis is a syncretised Shia religion, where its name Alawis means 'followers of Ali', referring to Ali ibn Abi Talib, the cousin and son-in-law of Prophet Mohamad (pbuh). Ali was the only person born in the sacred sanctuary of the Kaaba and apparently was the first young male who accepted the religion of Islam, and was the successor to Prophet Mohamad (phub).

To the Shias, he was the First Caliph after the Prophet (pbuh) but not so to the Sunnis who considered him as the 4th Caliph.

There in this unsettled succession to the last Prophet (pbuh) and the vile genocidal murder by Sunnis of his son and son's family lies the origin of the Sunni-Shia bitter and irreconcilable hatred.

On Alawis, Wikipedia says: At the core of Alawite belief is a divine triad, comprising three aspects of the one God. These aspects or emanations appear cyclically in human form throughout history. The last emanations of the divine triad, according to Alawite belief, were as Ali, Muhammad and Salman the Persian. Alawites were historically persecuted for these beliefs by the Sunni Muslim rulers of the area.

But such is the bitter rivalry between Sunnis and Shias that Sunni Saudi Arabia hates Shias even more than Israel or Israelis and has been known to collaborate with Israelis (Mossad) against Shias (Iran, Iraq and Southern Lebanon) or those close to Shias or republican Arabs (Palestinians).

So when news reports of Pak Haji dropping into Tehran to attend an Iran and thus Shia organized conference, the International Union of Muslim Scholars voiced its shock and outrage at the insensitivity of Pak Haji, more so, they said, at a time when they claimed the Muslim world (presumably the Sunni fraction) has been grief-stricken and angered by Assad’s regime (which is Shia, thus supported by Iran).

To top the f**kup, Pak Haji is the deputy president of the body.

I wonder whether it would be akin to the Holy Father (Pope) organizing charity drives for His Holiness, the Dalai Lama, wakakaka.

At that time, Pak Haji claimed his participation in the Tehran conference was on the invitation of Dr Abdurrahman Bayraan, an Iranian representative of the Union, whom Pak Haji's secretary said hadd been appointed by Yusuf himself.
However, to Pak Haji's immense embarrassment, the Union and Yusuf vehemently denied that the visit was sanctioned by it.

So now Pak Haji has shamelessly 'go-starn' (belakang pusing) to say his visit to Iran was for his party PAS.

Aren't the Chief Mufti of Terengganu or of Malaysia or Mr SMS Kay-poh-chnee of Perak going to say something? Wakakaka. And what about RTA? wakakaka again.

So why has Pak Haji put himself in such a religious embarrassment-predicament?

I think I may guess at the answer, wakakaka.

Pak Haji is a man who suffers from under confidence, so because of his psychological drawback, he seeks attention and 'recognition', and he seems to do this by controversial actions.

I wonder whether his deepset lack of confidence could have stemmed from the time of PAS President Fadzil Noor in 1990, when Fadzil went on a recruitment drive of younger Muslim professionals to diversify the Party's appeal, which might have pissed off conservative clerics like Pak Haji.

Furthermore, Fadzil Noor wanted Anwar Ibrahim as his successor in PAS but as we know, Mahathir head-hunted Anwar with a better offer. That might have also upset Pak Haji who no doubt looked at Anwar with resentment and jealousy. But can you picture Anwar as an ustaz?

Anyway, I believe that might have been the start of Pak Haji's under confidence, where he saw his party president placed more value on a non-ulama Young Turk who merely majored in Malay Studies. It must have been a total letdown for an ulama like Pak Haji, a bitter pill to swallow to be beaten in the aspiration to be party president of an Islamic Party by a non-ulama.

That resentment and jealousy didn't do much for him when another Pak Haji Nik Aziz took PAS into Pakatan where again Anwar was nominated as the putative leader. How jealous and more under confident Pak Haji must have been then.

'Twas hardly a surprise when after the demise of Pak Haji Nik Aziz, he began to indicate in more than one way his support of Anwar as Pakatan's anointed PM was less than enthusiastic. That culminated in his support of Azmin in the Selangor MB saga.

As mentioned, he seems to want to be different by his controversial actions, as if to assert his authority to shore up his own confidence, such as:

Maybe we should blame his lack of self confidence on Anwar Ibrahim, wakakaka.