Thanks India, keep them there 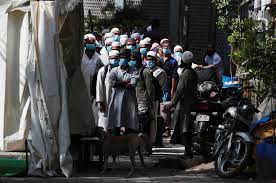 CORONAVIRUS | Indian immigration authority today arrested eight Malaysians who are believed to have attended a tabligh gathering in New Delhi that was linked to the spread of Covid-19 there, according to a news report.

The report by Delhi-based news company NDTV quoted sources as saying that the eight were detained at the Indira Gandhi International Airport when they were about to board a mercy flight back to Malaysia.

"Eight Malaysian citizens who were about to board a special flight to Malaysia were caught at Delhi's Indira Gandhi International Airport today.

"Sources said they were part of the Tablighi Jamaat Centre at Nizamuddin, which has been marked as a hotspot for the spread of coronavirus.

"Though international flights are not operating, special flights are being operated by some nations to evacuate their nationals stranded in the country," said the report.

The suspects were said to be handed over to the Delhi police and Health Department for investigation.

Last month, around 8,000 people including foreigners were said to have attended the two-day religious gathering hosted by Tablighi Jamaat, despite the Indian government's warning of Covid-19 and social distancing.

The gathering had reportedly become the biggest infection cluster in India so far and set off several other clusters of Covid-19 infections across the republic.

This had sent the republic's authorities racing to detect the participants and those who have come into contact with them.

It was reported that at least 20 Malaysians were found to have attended the two-day gathering from March 8 to 10.

The Indian Home Ministry had since vowed to take strong action against those who attended it, including foreigners who abused their tourist visa.