Once again (yet another ‘again’) Chinese Malaysians have found themselves in an undesired political situation where they could possibly play the role of ‘king maker’ in the next general election.

In the mainstream media as well as alternative news portals we read a mixture of the political preferences of, and antagonistic diatribes and snide remarks against, the Reluctant (not Chosen) Ones, with the latest headlines being The Malaysian Insider’s November polls likely after the Haj as BN courts youth, Chinese vote.


Officials familiar with BN strategies say Najib wants the ruling coalition to win back urban seats lost when the mainly urban Chinese voted in favour of the opposition in Election 2008.

“Najib wants support from the Chinese and the youth so the next few months will be crucial for those efforts,” a coalition source told The Malaysian Insider.

Pollster Merdeka Centre stated that Najib’s popularity among Chinese and Indians plummeted by 4 points after the Bersih 3.0 April rally.

I wonder whether it should be more correct to describe it as ‘… after the outrageous police brutalities against participants in the rally.’

I’m reminded of a scene I witnessed at ’s  during my school boy’s days. Some parts of the beach along were planted with fairly young Casuarina trees about 3 to 5 metres tall. The powerful waves at high tide had eroded the base or sandy embankment for one of those trees, with it nearly uprooted and half toppling.

There was an elderly Chinese man dressed in shorts and casual shirt who tried valiantly to save that tree.


I was told that every day he collected debris washed up on the beach and piled them around the tree and then added more sand to reconstruct a new base, while employing several bamboo stakes to brace up the imperilled tree.


But the next high tide would undo if not made worse the situation for the Casuarina. I was sure he didn’t imagine he was King Canute, but somehow he didn’t give up, perhaps he couldn't give up, sometimes shoring up the tree’s standing even as the waves at high tide pounded the embankment and him as well.

What was the outcome of that remarkable battle where a puny man sought to defeat the relentless power of the sea, I can’t tell because I didn’t follow the struggle to its end, assuming there was an end.

The Casuarina could be likened to Chinese support for BN while the relentless pounding waves the UMNO-Perkasa racist demagogueries against the Reluctant Ones. Najib would be that old Chinese man (Ah Jib Gor, or Ah Jib Pek) wakakaka, who each time thought he had built up a rapport with the Chinese, would only see the destructive waves eroding (again and again and …) the base of the tree, or Chinese support for Najib and his BN.

And who’s to blame? Perhaps no one. ‘Tis just the nature of the sea or beast!

As mentioned, most Chinese Malaysians prefer to stay out of the spotlight, not so much to carma (cari makan – they leave that to MCA and Gerakan politicians wakakaka) but to seek an independent living. Here kaytee is making a clear distinction between the obsequious and political carma which solicits the benefits of the UMNO-government largesse and that of an independent business/living minus or with the minimum of government interference.

“Leave us alone to conduct our business and seek high quality education for our children – just do not impose more and more barriers, impediments and unjust quotas to restrict our business practice and educational pursuit”, the Chinese would appeal.

Admittedly, the newer and younger generation of Chinese Malaysians are more political minded and unlike their elders, would talk more vociferously about and also assert on equal rights, human rights etc, with some even resorting to hypocritical theatrics like dressing up in sack cloth and ashes to pretend-mourn Altantuuyaa Shariibuu as if she was their favourite auntie, an act of demonstrative anguish and bereavement which they wouldn’t even perform for their dead relatives. But these would be the exceptions to the typical Chinese Malaysian community.

1969 – they decimated the MCA especially in Penang, Perak and Selangor, without any help from then 22-year old Anwar Ibrahim or a non-existent Hindraf.

What, without Anwar's or Uthayakumar's Hindraf inspirational leadership? Are you sure? How the hell then did they do it, wakakaka.

Speak softly and carry a big political stick. Alas, UMNO in 1969 carried a far bigger and deadlier stick, an actual murderous cudgel instead of just a political one, but nonetheless (regardless of whether there was any post 1969 election regret, and I believe there was none despite the loss and grief) there was no mistaking the preparedness of the Chinese to use their political stick.

Likewise in 1999, 2004 and 2008, the Chinese exhibited their collective strength one way or another to benefit either BN or Pakatan.

And they were happy when supporters of both Anwar Ibrahim and Uthayakumar’s Hindraf (as different from Manoharan’s & Ganabatirau’s Hindraf) claimed credit for the 2008 political tsunami because those hubristic claims would help keep them out of the spotlight – a wakakaka on their behalf ;-)

Dr Mahathir had acknowledged the vital support of the Chinese in his final election victory in 1999, though subsequently, in recent times, he didn’t show much gratitude, even warning the Heartland that the Chinese may one day own the country - after all, he did inform us, Melayu mudah lupa wakakaka. See Those bloody rich Chinese.

But alas, post 2004 and post Mahathir, a new ball game presented itself to ambitious and new UMNO leaders. Forgetting the usefulness if not importance of Chinese support for BN, they resorted to the age-old UMNO’s successful formula of being ethnic heroes, the wannabe perwira bangsa, defenders of the Heartland and guardians of ketuanan Melayu, to enhance their personal positions in UMNO’s internal party struggle, for them to get to the top and a possible (and very lucrative) ministerial position.

It didn’t help when their revved-up bigoted declarations, meant more for the Heartland to demonstrate their ethnic perwira credentials, were televised live to the public and thus the concerned Chinese, who felt far more marginalized than ever, and who were even more fearful for their ability to continue eking out a living through independent business prospects or educational opportunities for their children within what they saw as a shrinking margin allowed for the nons.

And continuous insults to them such as ‘sons of prostitutes’ no doubt stuck painfully in their ulcerated guts to remind them of UMNO’s unwarranted insult to their social injury.

In their helplessness, the concerned Chinese were left with only one available option, to use their political stick in 2008, and hello, déjà vu the 1969 election outcome.

In spite of 1999, Dr Mahathir piled on the hurt, accusing of the Chinese of ‘buying & selling’ the Malays, or enslaving them, to take over the country.

The Malays will lose their 'ketuanan' (supremacy) and see a non-Malay becoming a prime minister in Malaysia in the future if they fail to continue efforts to be above the rest.

If the Malays themselves become so weak, poor, begging around and can be bought with money to support non-Malays (to become a prime minister), then at that time, a non-Malay will eventually hold the post.

It is up to the Malays whether they want this or not. But if they can be bought that even their own race can be sold, then we might as well not have a constitution.

The Malays then can become slaves in their own country.

Abetted by Perkasa and the mainstream media with Utusan Malaysia in the vanguard, they were the waves of bigotry that battered the Chinese ‘Casuarina’. 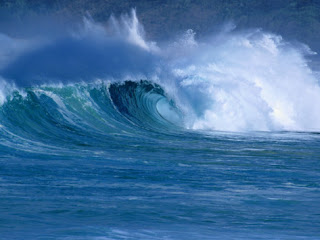 And have those waves helped poor Ah Jib Gor wakakaka who has the onerous job of building up an eroding base of support from the pissed off Chinese?

In this new episode of Man versus Sea, we will soon know the result.
Posted by KTemoc at 6:10 pm